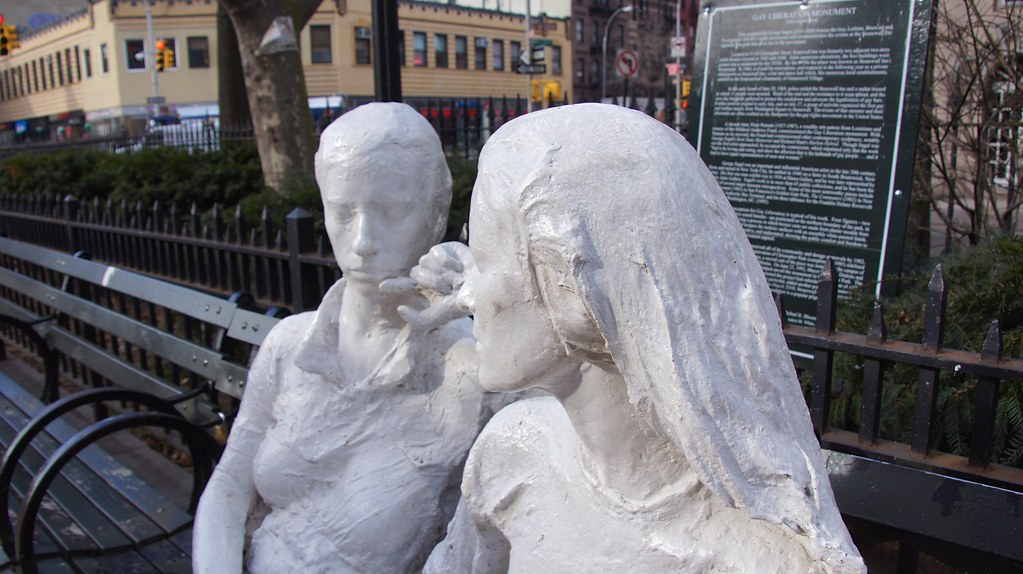 One of the ways to experiment is to take 20-30 photographs of one object. I happened upon this monument, Gay Liberation Monument, by George Segal, in New York City, last week – didn’t get to 20 photos, it was 18 degrees outside.

How can you not notice its human scale and the longing for “public comfort and freedom to which the gay liberation movement aspired.” This, especially during a time when this vulnerable population was clinging to life in the health system and in society.

The week prior, by coincidence, I happened to work with the Boy Scout Memorial, in Washington, DC, and the comparison is so stark.

The BSA monument has been in place in President’s Park since 1964. It was surveyed in 1993 and found to be “well maintained.”

The Gay Liberation monument was destroyed and tortured in California, until it was liberated itself, to New York City, in 1992. Even then, it represented a norm of equality and health that wasn’t imaginable until only recently, and in only a handful of urban centers.

Coincident to all of this, they say that the BSA is rethinking its stance on promoting discrimination. It sounds like they are not there yet, though (see: Boy Scouts of America: Not Good Enough – Human Rights Campaign).

The Segal sculpture helps understand two, or actually three things (can you guess) : all you have to be is human, equality equals health, and love always wins.

As a den mother in Cub Scouts, I am praying that the BSA opens the organization to gay and lesbian leadership roles.  A large number of the chartering churches have an anti-gay stance, so change has been very slow within the organization.  I hope they will come to a decision of inclusion this weekend.

ReginaHolliday
You know, I didn’t know the Segal sculpture existed and I wasn’t looking for it, I just happened on it on my walk in New York. My first thought as I was admiring it was what I think you and I have felt in so many rooms together, which is “what fuels the desire to exclude these or any individuals from society and shorten their lives? How did they ask for this treatment?”
Regina, I ( and humanity ) are so lucky to have your voice as a parent and a person in our lives, thank you,
Ted