Rosa Parks, Revisited – NYTimes.com – This article confirms what I heard inside the Rosa Parks bus. In the exhibit at The Henry Ford in Detroit, Michigan, an interview of Ms. Parks that occurred shortly after her act of civil disobedience is played inside the bus. I’ve heard the interview twice, and to my family doctor ears, I have felt that I wasn’t listening to a timid, tired person. Here’s what I wrote in 2011, on my first visit to the bus: (see: Photo Friday: Why fight traffic, fight discrimination instead, The Rosa Parks Bus @thehenryford | Ted Eytan, MD)

Inside the bus, you can hear a recording of Rosa Parks being interviewed after the famous incident on December 1, 1955. What I heard was a tone of defiance mixed with the feeling that her heart was racing as she told the story. Rosa Parks was 42 years old in 1955.

This feeling doesn’t corroborate the accounting of her action of the story at The Henry Ford, there it says “Her action was spontaneous and not pre-meditated, although her previous civil rights involvement and strong sense of justice were obvious influences.” Based on what I heard, I had my doubts.

This was not a spur-of-the-moment decision. It was a political calculation informed by a life of activism. As Parks put it, “an opportunity was being given to me to do what I had asked of others.”

And the idea that she stayed seated because of physical fatigue is pure fiction.

“I didn’t tell anyone my feet were hurting,” the book quotes her as saying. “It was just popular, I suppose because they wanted to give some excuse other than the fact that I didn’t want to be pushed around.”

Why does this matter to me? Because I don’t want to believe that leadership like this happens serendipitously. The people who I know are dedicating themselves to make a change for the people who come after them are driven, soulful individuals. To say that there is nothing behind the transformations they catalyzed other than tired feet is to marginalize their role.

I am so glad I have experienced the bus and the voice of the person who came to Montgomery City from the future and said, “listen to me.”

On my second trip to the bus, I had the same experience, with another person who says the same thing to our society today (@ReginaHolliday). 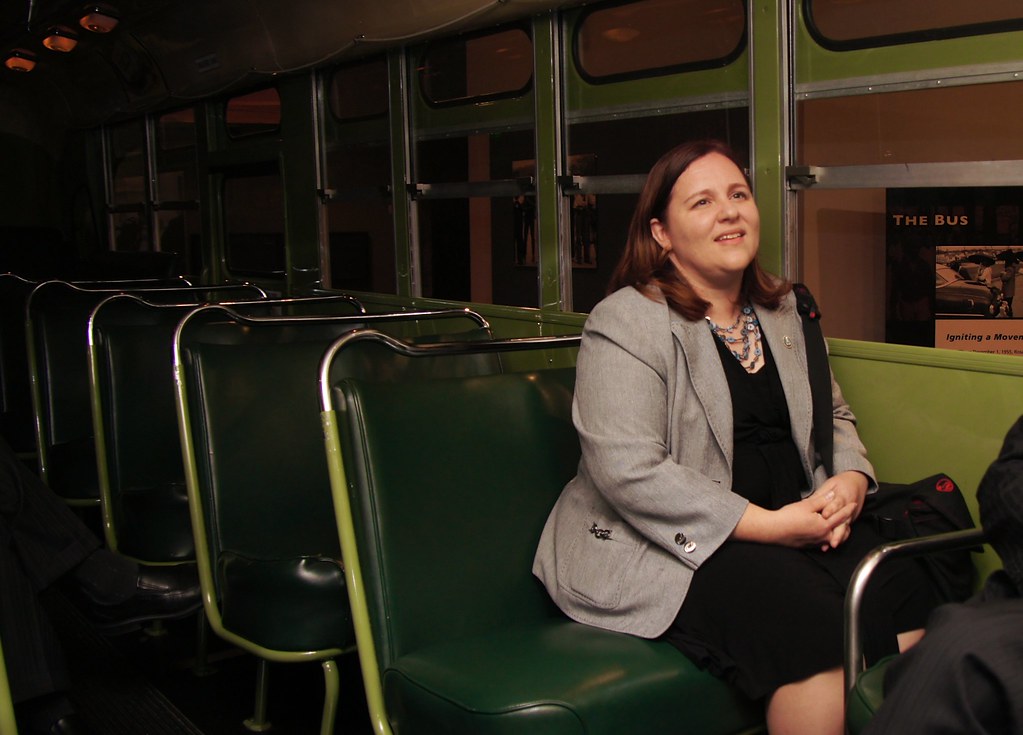 View Regina Holliday at The Henry Ford 17526 on Flickr.com

As with everything in life, it pays to listen carefully. Thanks for the tip from Madhu Prasad, MD, fellow human enthusiast, from the Henry Ford Institute for Innovation (@HenryFordIdeas) in Detroit, Michigan, USA.

Here are more images of the bus from my first trip. To see Regina and I in action on the TEDx talk stage of “Embracing Failure” – click here.