When I was a little kid, we were taught about the holocaust in hebrew school. A lot. When I asked why, my teachers would say, “because it could happen again.”

Then when I was an adult, in medical school, I learned they were right.

It was unbelievable as much as the Quilt is unbelievable. It’s on display across Washington, DC, for the month of July, the first time since 1992. 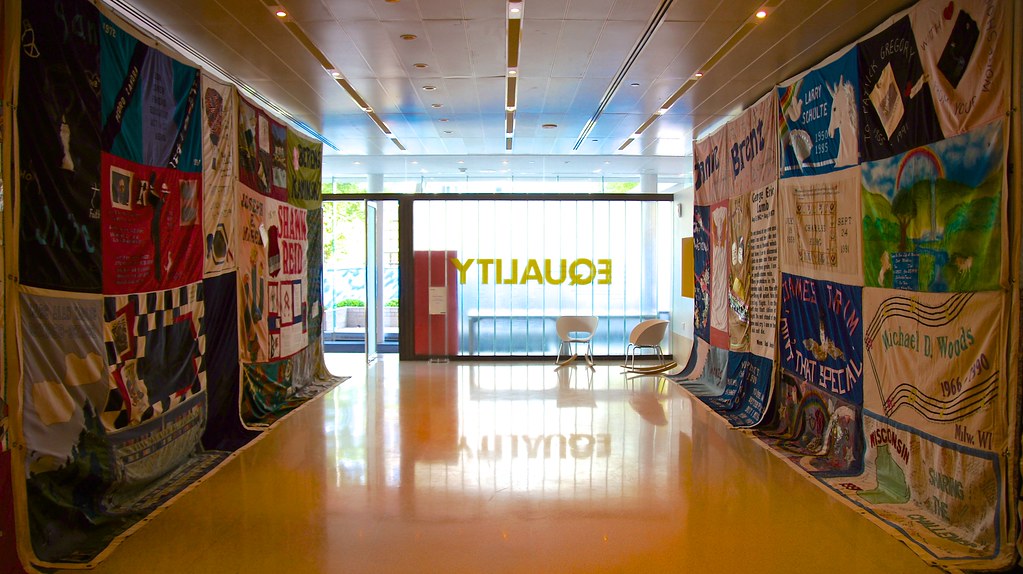 I saw with my own eyes and heard with my own ears how people with HIV and AIDS were treated by the profession I was training in. Think of an image of having a back turned to you in your time of greatest need. Those in the profession who did treat these people with compassion had backs turned on them, too. People sometimes talk about this time as the “height” of the epidemic. At the time, though, no one knew it was the height of anything, people were dying, there was no end in sight, and because they were legally discriminated against in all parts of society, their lives were less precious.

If our health system does not focus on the people it’s serving instead of the system itself, and our society doesn’t value every life as equal, this will happen again. Can’t let it. 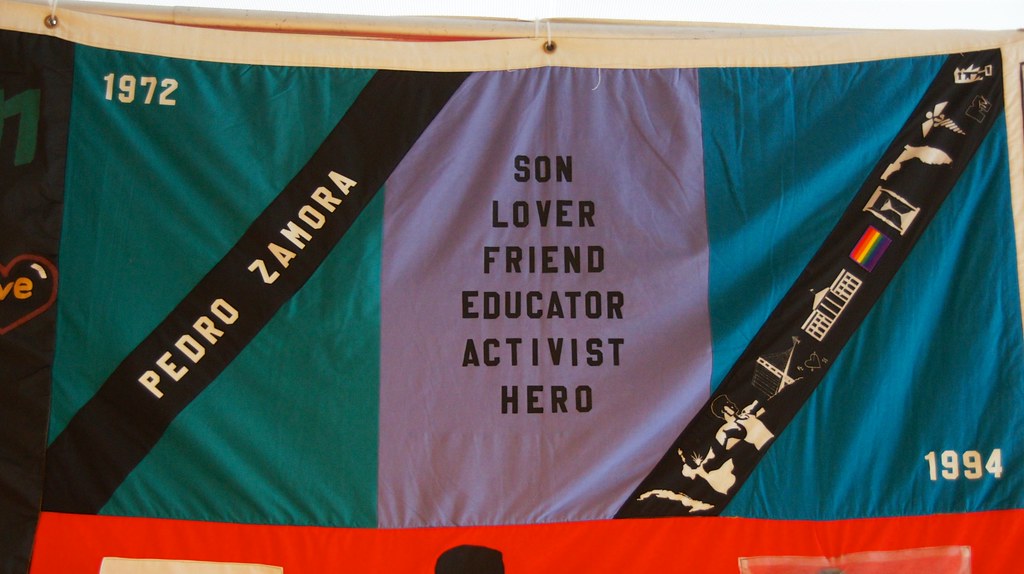 “As gay young people, we are marginalized. As young people who are HIV-positive and have AIDS, we are totally written off.” – Pedro Zamora, 1972-1994

I haven’t seen the quilt (or more specifically parts of it) since I lived in SF at that “height” we talk about. I volunteered for the Names Project back then. And I watched so many of my dear friends die. The one whose memory I seem to carry most is my friend, Helix. So kind, so dear; truly, hes was the most loving, earnest, soul I may have ever encountered. Gone at 22. Just gone. Like his light never shone on my face. Like his heart never sang with happiness. Like his love never existed or mattered. except to me.

back then we all wore shirts that said “Silence = Death”   Ya know? it still does. but no one wears the shirts anymore.

Thanks for sharing the photos, Ted. You’ve broken my heart again, but maybe it needed it. Maybe, even I  who spends so much time giving voice to the voiceless, forgot to include these voices… the ones silenced forever, except on a piece of cloth, except when we raise them up again vowing never to be silent again.

I have so many things to ask you about when I see you next.

We must have crossed paths. I remember the shirts. I didn’t wear one because i was too afraid. At one point I sat in a room with hundreds of doctors who were so disinterested in your suffering as you wore the shirts outside of where we were sitting. We were told to ignore you, and not identify ourselves as we walked past you. I secretly cheered you on. My fear was a real one, that my career and maybe my life would be ended if I wore a shirt. Neither happened, and 20 years later I found myself outside another room with an uninterested group of people, this time, with you, wearing a shirt that said love. As in love wins.

I am so sorry for the loss of your friend. His life meant something.

@tedeytan Of course we crossed paths, though we probably won’t find the actual points of intersection quite as easily as we both hope. SF was a big place back then, and the fight was widespread.  I want to talk to you about how hard it was to be you in that place. You were much braver than I. Sitting in the rooms with the people who could steal your dreams, hoping against hope they would not discover you in their midst so you might one day be the powerful insider/advocate you are today. You may not feel brave, but I tell you, that is courage. I recognize it. Fighting overtly is often seen as bravery, but staying the course, slowly changing  the status quo simply by your presence is a powerful act.

@kaitbr Well said Kait, without ascribing levels of bravery, I think we all did what we could, and it’s delightful that (a) we’ve re-united and (b) we haven’t forgotten what we learned. Even then, the bigger fear than loss of career, was that I would forget. I am so happy I haven’t forgotten, and that there are people around me who remember, too.

Ted,
I am so touched by your compassion, coming across your blog by serendipitous ways of the web, looking for other’s who work on what is dubbed patient-centered care… thank you for this.
Am going to follow your blog and cite you in my speaking and consulting. Am an Emmy-winning former NBC & WSJ reporter who has spent the past decade translating behavioral research into practical ways we can connect rather than conflict, be more quotable and storyboard places and conferences to be more meaningful and memorable to those they serve.
I look forward to learning more from you,

@KareAnderson Kare, Thanks for the kind comment, and feel free to quote / use / appropriate whatever you’d like to further your work and I’ll follow you back, Ted