Thank you for using my photo to adorn the podcast by @TradeoffsPod, a podcast about the challenges of our health system.

The photograph was taken in 2018 at a rally to protect transgender person health. The rally was held inside the AFL-CIO building in Washington, DC, and I still remember the fascinating juxtaposition of the fight for equality in the main hall with the photographic history on display in the foyer:

The podcast also brought me back in time to the fight (yes, it was a fight) to ensure care and coverage for human beings who are transgender in our health system. As Kellan Baker, a mentor to me and key interviewee in the podcast relates, the discrimination we saw was nonsensical, and has fortunately been torn apart in many ways. The combined nursing, medical, and allied health professions have now spoken multiple times to state that it is unethical to deny care or coverage to a person who is transgender or gender non-conforming.

Being There, When the Future was Born

The additional time(s) the podcast brought me to were the ones where I was able to capture the future being born. This image, from 2014, was taken at Washington, DC’s John A. Wilson Building, the center of District of Columbia Government, the day Mayor Vince Gray announced that health insurance companies would no longer be allowed to operate in the District, to cover any human, unless they covered every human who is transgender. 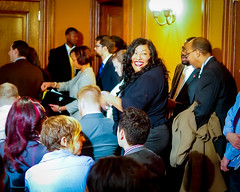 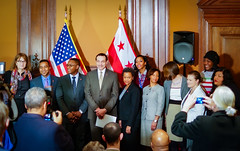 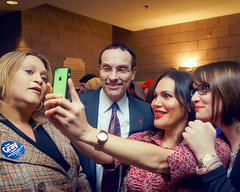 Mayor Gray distinguished himself in so many ways compared to his predecessors. He willingly interacted with people in the transgender community. It was noted that he would actually ride in an elevator with a transgender person (what a silly milestone to have to remember). The most famous quote attributed to him that I recall was, “If you don’t like transgender people, then you can leave the city (of Washington, DC).”

As I said then and still believe today, there are some things doctors can’t or were unable/unwilling to do, which is why the work of Kellan and our policy makers has been so vital.

Enjoy the conversation. There is still more to do, and thankfully, a lot has already been done, because they are the right things.

We look at the fight to secure health care for trans Americans and explore the impact these policies have had on helping people get the care they need.

Source: Core To Who I Am – Tradeoffs