As I do from time to time, I’m taking an online course in something of interest, in this case, TechniCity, produced by the Ohio State University. I’m interest in some of the positive health changes that could come from technologically enabled cities. It’s especially interesting to visit some of the projects described in 2013 and see if they are still operating…

We have an assignment in the course which is to “use technology to improve a city,” and I like technology and the city I live in, so here’s my proposal. Thanks to the Walking Summit for inspiring me and teaching me more about what makes a street a place…

1. What’s the issue I want to explore?

I would like to make explore whether automated, infrared pedestrian counter data can differentiate a “street” from a “place,” as a supplement or to augment in person audits.

2. What do you hope to learn by exploring this issue?

I hope to learn more about the utility of social technologies like population sensors, as opposed to wearable devices on individuals, which we are finding have limitations.

Can population sensors truly inform the building of places and/or improve the health of residents by supporting interventions to promote physical activity?

I have commented on this previously here (see: Why not wearables: Using population sensors instead to promote physical activity )

Recently, at the Walking Summit in Washington, DC, I participated in a workshop where we did a “Street as Places” audit, using a paper tool. For our workshop, we audited Columbus Circle, which is right in front of Union Station.

Like few other places, streets are a public stage where life unfolds. From town parades and trick-or-treating, to markets and public gatherings, they’re where we celebrate and come together with our neighbors. They’re where we bump into friends, and one of the few places where we routinely encounter people who are different from ourselves. They’re where people have gathered to protest injustice for centuries. That’s why Project for Public Spaces has advocated for the idea that streets are more than just a means of mobility. Streets themselves are critical public spaces that can lend richness to the social, civic, and economic fabric of our communities. – Streets as Places – Project for Public Spaces

Using the tool was a little eye opening, because a street/location that I pass through frequently really is not a place, as you can see from the photos. I learned from this experience that I can take things for granted around me and assume they will never change, and a lot about how a planner views a space differently than a doctor does.

3) Why: Why are you drawn to exploring this issue

The audit made me think about Complete Streets and Places. Is a complete street always a place? How do we tell the difference?

Where I work, at the Kaiser Permanente Center for Total Health (@KPTotalHealth), we have had an infrared pedestrian sensor installed since January 2015. 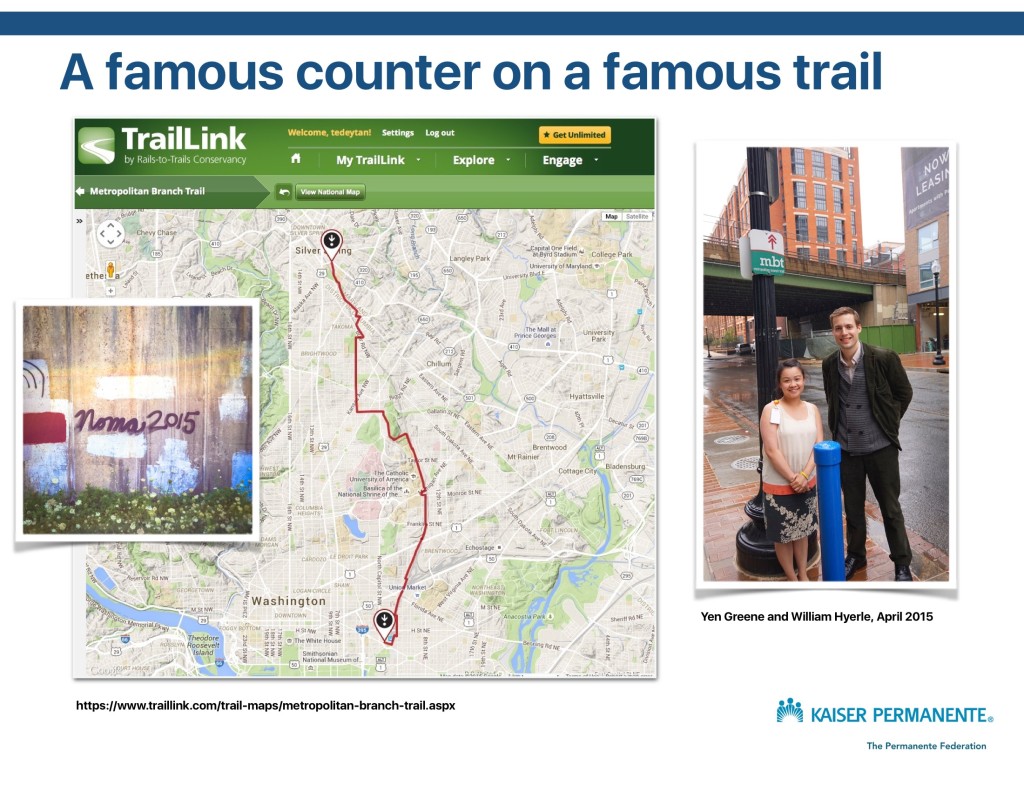 It has been providing data regularly to us during this time, and it shows a clear pattern for use of the street it is on:

This is a commuting pattern – people are walking south, to the center of Washington, DC, in the morning, and north, away from downtown in the evening. There doesn’t appear to be any lingering, or features of what we might see in a place as described above.

What I would like to do is find another infrared counter in the city that is in a location that is more like a place, and see if the counting pattern looks different. Will this data allow us to determine if a street is a place?

4) Where: What city are you exploring this issue in. You should include pictures, maps, or other graphics if possible showing the issue in your city. Be sure to include the sources of any images that you include. In order to include these images in your assignment, you will need to provide a weblink to the images you want to show.

The policy, effective immediately, states in part that DDOT projects “shall accommodate the safety and convenience of all users.”

The street that our counter is on has only been recently completed, and visually, it looks like a complete street:

5) Who: Who are the people that are most impacted by the issue?
a. Who do you think you would like to engage as part of this project?

Anyone who is involved in tracking of pedestrian/bicycle movement using sensors and working in placemaking in communities.

I would like to engage a nearby city or location within Washington, DC to access pedestrian counts from their infrared sensors, and compare the patterns with a physical place audit.

6) How: How does the student hope to explore this topic:
a. Data Analysis: What data do you hope to obtain and how do you anticipate using this to support your project?
b. Design: Describe the key design elements that you hope to include in your project.

7) Final Product: Describe what format you anticipate that the final product will be in. You could create a poster, video, document, or other proposed final product format.

Probably a document with a chart or two embedded 🙂 .