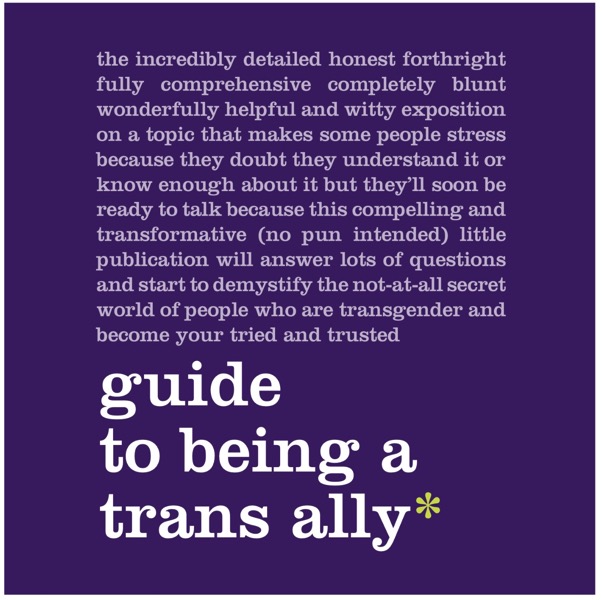 The Guide to Being a Trans Ally, Straight for Equality, PFLAG (Parents and Friends of Lesbians and Gays), (2014)

Continuing my learning journey as part of #KPLantern (see: #KPLantern is beginning – Human Centered Insights into Transgender Person Health, to make it better | Ted Eytan, MD), this is a handy guide. Read it.

It’s produced by Straight for Equality (@S4Equality) which is:

….a national outreach and education project created in 2007 by PFLAG (@PFLAG) National to empower new straight allies who, unlike a more traditional PFLAG member, don’t necessarily have a family connection to the gay community.

In the era of transgender person equality, the label “straight allies” doesn’t exactly fit, and this is explained in the document, which should be read if you are planning to be there for LGBTQI people and not just a few of the letters – and why shouldn’t you be, it’s only fair.

Being an ally is something new to me, because previously the first three letters of “LGB” were the ones that needed allies. Now those people are becoming allies for the other 3 letters (Trasngender, Queer, Intersex), which is a new experience for us.

To prepare you, the guide gives a pretty thorough explanation of the difference between sexual orientation and gender identity. Again, being an ally means being informed, and it’s really up to the ally to get informed and drive their own learning.

What’s an Ally and the Equality Ally Spectrum

There’s a patent symbol next to a diagram describing the spectrum of alies so I won’t reproduce it here (see page 23).

I guess I am on the far right as the Super Ally, for reasons which I have revealed here and on the TEDx stage. I didn’t go into health care to support discrimination, and fortunately I don’t have to, which is why my generation of physicians is changing everything.

Reflections based on my ally journey

There are five key barriers listed to being an ally and five positive ways to be a trans ally, which are well described and useful:

I’m comfortable discovering things on my own and not seeking too much information from the people I’m supporting. This is very good advice, oft repeated to me.  I am from a group that has allies and we know what that’s like, the inappropriate question asking.

Under “conflict aversion” I sense an excessive need to protect those who really want to learn, for their health and ours. We need to get beyond a place where people aren’t allowed to be made aware of unfair practices in employment, health care, living their lives. I like this guidance, from another source, better:

I’m less worried about people shutting down and more concerned about how much adaptation the ally (or the vulnerable population) should be responsible for in the learning process.

I have seen enough people not be served by a system that believed it was objective and compassionate, where no one dared say the words above. What you permit, you promote, and what’s health care here for.

A few additional tips from me (because it’s my RSS feed):

Are you having ally experiences in support of people who are trans that you’d like to share or thoughts on the above? Let me know in the comments or via twitter (@tedeytan). Thanks @PFLAG and @S4Equality for creating a ready reference for us. If you don’t know where to start, start here.

My wish is that one day people like my twin receive only gratitude, not pain and discrimination, in exchange for their courage.” —Katherine

[…] Just Read: Guide to being a trans ally – Straight for Equality – PFLAG National […]

Leave a Reply to WAIT = Why am I Talking? Learning how to be a better Ally | Ted Eytan, MD Cancel reply