Mayor for Life: The Incredible Story of Marion Barry, Jr.(amazon)

– Check out from your local library

It is a gift to have this piece of history completed before his death, and it’s worth the read, if you love Washington, DC, or if you love leadership, as this is one of the most impressive leadership stories of the 20th Century.

Where he came from and the Washington, DC he came to

Marion Barry was ABD (all but dissertation) with a Master’s in Chemistry earned in the academic institutions that would allow black men to study in them. If 2015’s Washington, DC is still growing up, the picture of the city 50 years ago is actually and sadly understandable:

In 1965, most people in Washington had no use for downtown. They had one huge building on the north side of Pennsylvania Avenue, an FBI building. They had no business buildings and nothing of interest for the people. There were no high-rises; no fabulous architecture.

Black people lived in poverty, with a 75 % white police force. Black officers were not allowed to arrest white residents, only “detain” them. 3% of the city’s contract business was given to black owned businesses.

Barry was a civil rights crusader in the Free DC movement, which eventually metamorphosed into home rule, an incomplete version of self-determination.

His first appearance on the front page of the Washington Post was in July, 1966, for hosting a neighborhood block party without a permit. He founded youth programs like Pride, Inc, that gave young black men summer jobs and taught them how to save. This article from Ebony magazine in 1967 describes the program.

It’s worth listening, in Barry’s own words, about the struggle for a community to become a place with a foundation for people’s livelihoods, and the writing style is engaging and direct.

Fallibility and the drugs that consumed people, not the other way around

Barry gives a very detailed account of events at the Vista Hotel in January, 1990, preceded by a series of bad decisions, during a time when the city was under siege. It seems no one was spared. We now know (see: Just Read: S Street Rising: Crack, Murder, and Redemption in DC ) that the Washington Post reporter assigned to cover Barry’s arrest the night it happened himself smoked crack in the same hotel that evening.

Barry’s account of his arrest and the drug wars that littered DC’s streets with murder victims is definitely a page turner. Was he capable enough as a leader to prevent or manage what happened in our city? And really, what were the enabling factors that allowed young men in a place like Washington, once destroyed by riots, to be destroyed again by crime and drugs.

It’s impressive to read his and Ruben Castaneda’s (@RCastanedaWP) book side by side, to see the different perspectives of what seems like a very scary time – with police losing control of neighborhoods staffed with young men with much greater firepower, and the interplay between the police and the men on the streets.

I did walk around some of the neighborhoods most notorious; some of them are placid now, one of the streets, Orleans place, a short one-way street, is filled with speed bumps. Another, Hanover Place, Northwest, is now adorned with a Kaiser Permanente billboard.

Relationship with the LGBT Community

In his later years, Barry became somewhat estranged from the LGBT community, because he did not support same-sex marriage, which became DC law in 2010. In his early mayoral career, he made a point to reach out and include the LGBT community, visiting their social halls and meetings. He goes to great lengths to mention his support of the community early in the book. Toward the end he does discuss his decision not to support same-sex marriage as one based on the interests of his Ward 8 constituency, and that if he was Mayor, he would have supported it.

One of his successors, Mayor Vince Gray (@MayorVinceGray), who I got to meet several times, was more clear. He said, “You’ve got to stand on the right side of history.”

This is what Barry missed out on, but our generation will not: Standing on the Right Side of History with Ruby Corado, David Walker, Mayor Vince Gray, Washington, DC USA | Ted Eytan, MD

DC: still a work in progress 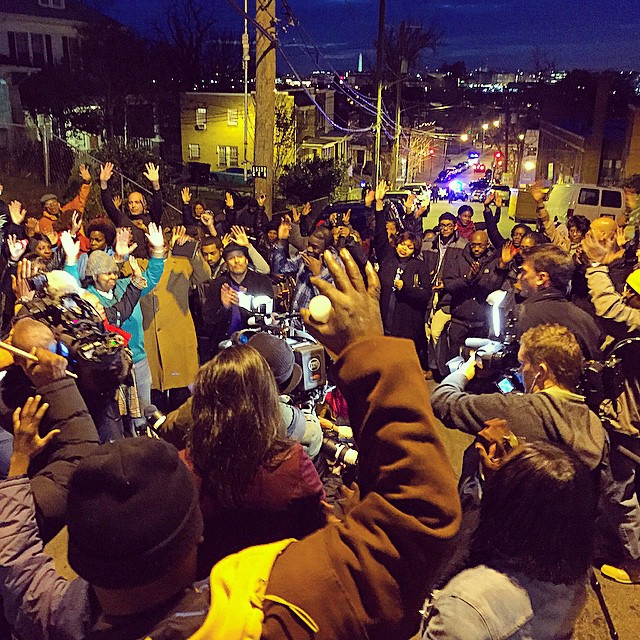 “Ride Life until the wheels fall off – Special amazing DC moment, honoring MarionBarryJr in Anacostia by Ted Eytan, on Flickr

There is a fairly strong emphasis on race differences in Barry’s accounting of life and his leadership in Washington, DC. I appreciate his candor. To know where you’re going, you have to know where you came from. I did get to meet Mr. Barry once, and I’m glad that I did. I met his community the night that he died, next to his humble home, in Anacostia. It was a real moment with real people. It was said on that street that evening, “Ride life until the wheels come off,” and to an extent it’s what Barry worked to help others in his community do, even as he and they fell down. The question he asks is what’s the responsibiilty of government to give people a foundation so they fall down less.

As we fill our population back to pre-destruction times, we are lucky to live here, in a place that doesn’t work for everyone yet, because that’s where you learn, grow, and innovate. I wouldn’t have it any other way 🙂

I felt that taking my name down from a city project that I was totally responsible for developing was blatantly disrespectful. So after she (Mayor Sharon Pratt-Kelly) took my name down from the Reeves Center building, when I got back into office, I put my name right back up. I was not going to allow anyone to erase my history in the District.