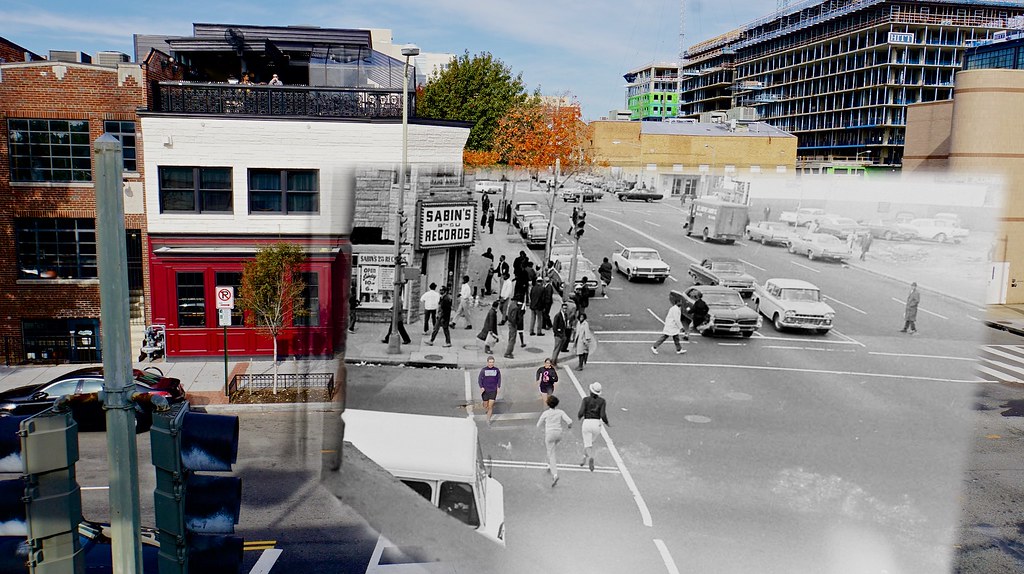 I have been learning how to combine photos recently, and I am a fan of everything Washington, DC, history, and diversity, so….

Only one of the two photographs in the composite is mine. The other was taken on April 4, 1968, the day Martin Luther King, Jr. was assasinated. Unbeknownst to me (until recently), one of the most popular hangouts for the LGBTQ community in Washington used to be a photographic studio.

The 1968 photo comes from an amazing collection now housed at the Library of Congress. I decided to leave the 2014 joggers in the image to convey a healthy respect for the sacrifices that were made by those who came before us. It’s part of the reason I came to Washington, DC in the first place, to learn and observe.

Detailed description and links below.

A crowd mills in and around Sabin’s Records at 9th & U Streets NW, Washington, D.C. after the assassination of Dr. Martin Luther King Jr. on April 4, 1968. Note plywood being handled on the 9th Street side of the building.

Part of the WUST radio station can be seen on the building one block north on 9th Street at V Street NW. The city exploded in anger at the news and experienced among the greatest property damage of the more than 110 cities that erupted April 4-7, 1968 and set a then U.S. record for mass arrests when more than 6,100 were detained.