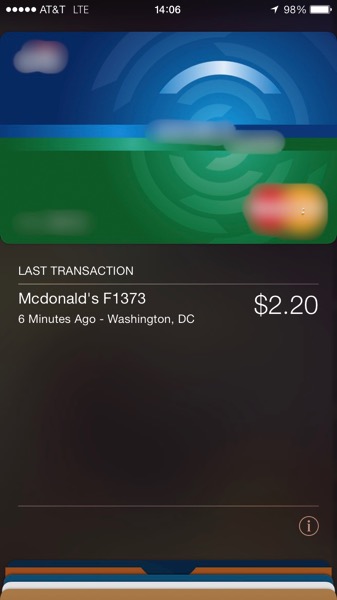 My first transaction. Just a pair of vanilla cones, easily walked off / not to worry.

The day ApplePay was released to the world, I happened to be with a few close friends from the Innovation Learning Network (@HealthcareILN), in Charlotte, NC. Okay, I actually crashed their dinner – it was with people from Kaiser Permanente Colorado (@KPColorado), Robert Wood Johnson Foundation (@RWJF), HealthPartners (@HealthPartners), Nordstrom (@Nordstrom), and our world famous Innovation Consultancy (@KPInnovation) – who wouldn’t want to crash?

What they probably all remember is the drumbeat of my request to find an establishment where I could try ApplePay for the first time. My first transaction ultimately happened in Washington, DC a few days later, which is probably a better place for me to enjoy such a milestone anyway 🙂 .

I remember Tim Cook introducing ApplePay on September 9, 2014 – in my mind it was presented as mostly convenience and ease – the end of the wallet as we knew it – with a little bit of security added on. I wanted to try it just because of the cool factor, because at some level I am an innovator (shh, don’t tell, I try and portray myself as early majority).

What completely caught me off guard was what happened next.

When one, then two major retailers abruptly disabled support not just for ApplePay, but all contactless payment systems over the weekend, security took center stage. And in the process fairly large banks of good will began to experience significant withdrawals…

I have posted about the bank of good will concept previously: Using social media to build up the Bank of Good Will – Businessweek | Ted Eytan, MD, which is otherwise called “Using your peacetime wisely” to build a trusted following in advance of times of crisis.

In this case one of the companies has built a sizable amount of good will based on the decision to discontinue selling tobacco, and a nice rebrand (@CVSHealth @CVS_Extra). Now, watching the twittersphere light up shows what I’d call a significant erosion of that good will, and interestingly, around the issue of “health” in the broad sense.

If you do search of comments directed at @CVS_Extra today (click here to see a realtime search of tweets directed their way), you’ll see a slight reduction in the simmer, with tweets alternating between carved pumpkins and mild to moderate what I’d call “unhappiness” about the decision to shut off contactless payments for all people, even though they’ve been working in stores for several years now. Obviously turning something off that people once had is worse than never having it in the first place.

Looking at the unhappiness though, shows that people are discounting the health rebrand based on a perceived threat to the health of their financial transactions. In other words, they are making a link between their community’s physical health (improved by making tobacco less available) and their personal financial health (degraded, by making secure transactions less available). You can see it in the tweets, several of which I’ve favorited to demonstrate this.

As I look deeper there are actually people who appear to have joined Twitter just to make their opinion known. And people who don’t even own the required equipment (Apple iPhone 6) who are unhappy.

The issue of security, as explained by Tim Cook, is that the contactless mechanism of ApplePay keeps information held by the consumer, in the consumer’s hands (or their mobile device) and does not transmit it to the retailer – a one time token is created for the purpose of the purchase. The old-fashioned swipe-your-card method transmits a credit card number to the retailer with all the challenges that ensue from that approach (including free credit monitoring, which most Americans, including myself, now have as a result…).

I’m not going to get into the why the retailers made the decision they did and why a competing system is causing grief (plenty online about that), just thought it’s useful to point out this connection from a health perspective.

Health is about wellbeing and security in all forms, including physical, spiritual, financial, that allow people to achieve their life goals.

As I am fascinatedly watching through the lens of ApplePay and the theatre that is social media, consumers are making it known in 2014 that promoting health means promoting all of it. I assume I’m not the only person seeing this (because I’m not that smart and my ideas aren’t that unique) – let me know your observations in the comments…