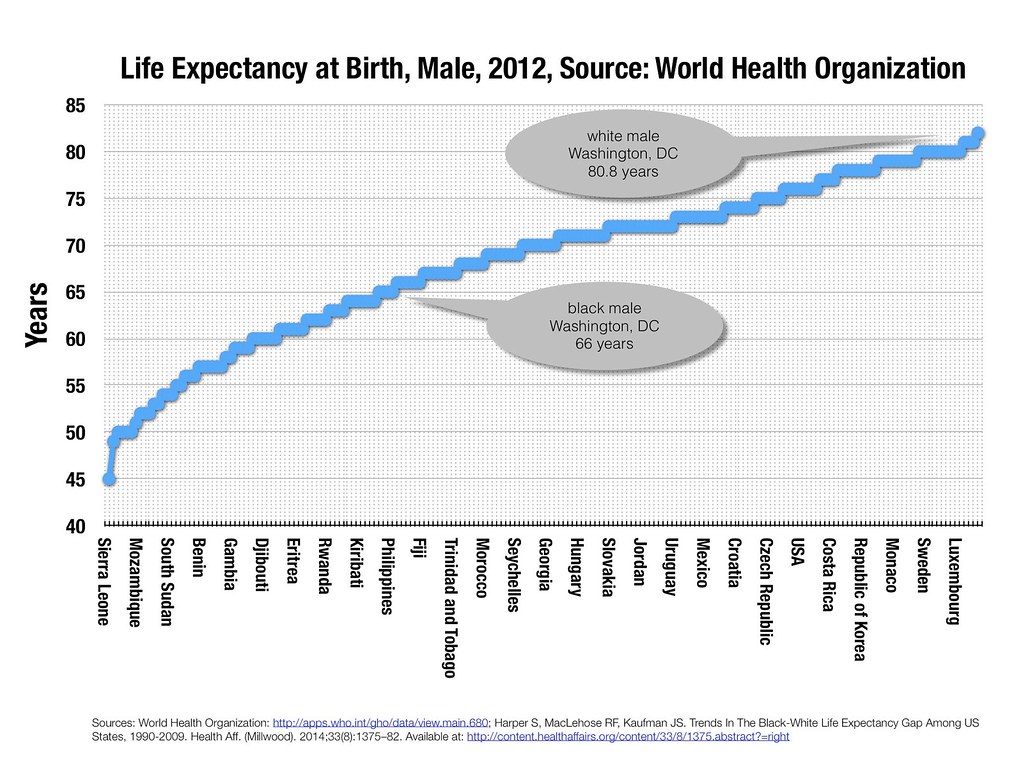 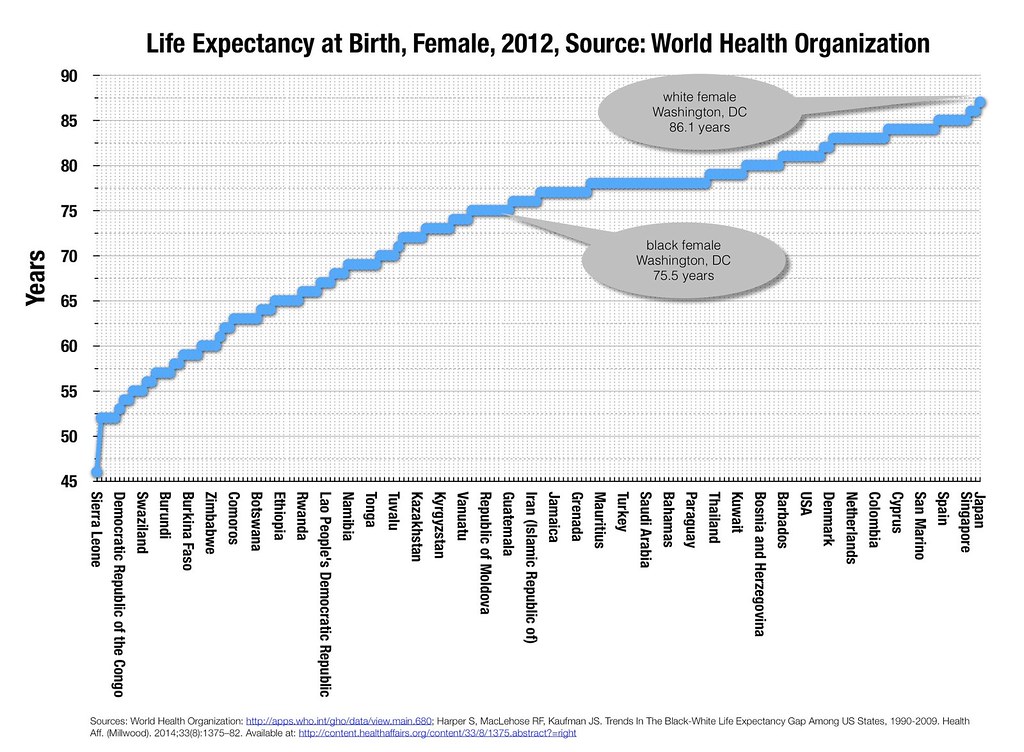 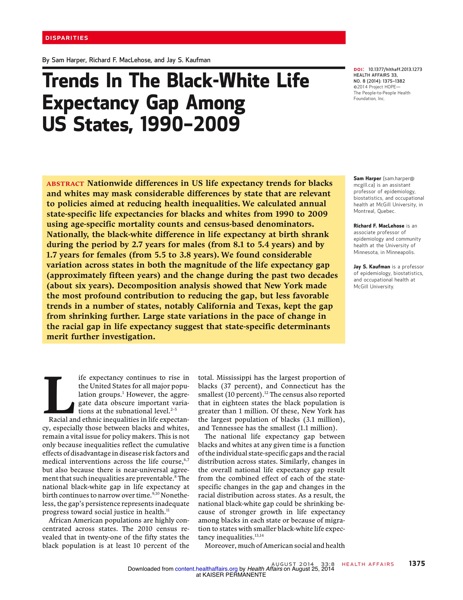 This article caught my eye because of my recent trip to Anacostia, in Washington DC’s Ward 8, where health disparities are extremely tangible (underscore): The People of Washington, DC’s Anacostia are Building a Culture of Health | Ted Eytan, MD

They are not just tangible in Anacostia, they’re visible on my walk to work through the city, where I pass through about 8 years of life expectancy. Just do a search of “#activetransportation” on my Twitter feed to see photos of what this looks like; it’s obvious.

This paper, published in this month’s Health Affairs (Harper S, MacLehose RF, Kaufman JS. Trends In The Black-White Life Expectancy Gap Among US States, 1990-2009. Health Aff. (Millwood). 2014;33(8):1375–82) is an analysis of the disparity in life expectancy between whites and blacks in all 50 states and the District of Columbia, using census data.

It confirms what I see on my walk to work, and adds another piece of data that I don’t see, which is that this disparity has continued, unchanged, for the last 15 years:

And then if you compare the change in life expectancy for women (men show the same trend), it’s been constantly disparate since 1990. 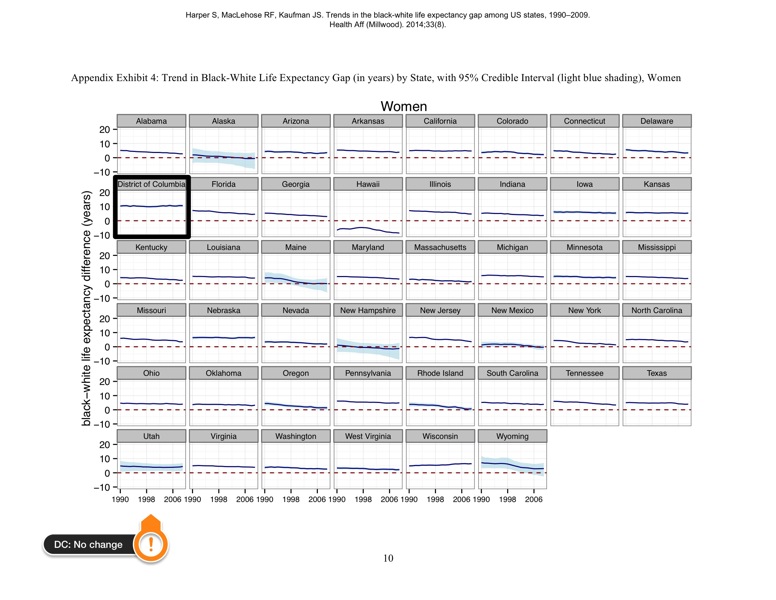 And then there was New York

New York State has shown a different trajectory, as you can see from this chart. There has been a massive upgrade in life expectancy for black men and women compared to their white counterparts, narrowing the gap the greatest.

I’ve written about this previously (New Yorkers Living Longer Than Ever, Outpacing National Trend, a look at the data | Ted Eytan, MD). It’s real. And since I’ve written about it, a review of what happened in New York has been published just this year (Preston SH, Elo IT. Anatomy of a Municipal Triumph: New York City’s Upsurge in Life Expectancy. Popul. Dev. Rev. 2013). A lot of New York’s success has come from identification and treatment of HIV, as well as the same for drug and alcohol related injury/death. It’s worth a read for sure.

Our cities are changing, we just need to make the change happen for all

In this map you can see where the black and white population live. The green color represents black residents, the blue represents white residents:

I cross the “dividing line” in the middle when I walk to work. Ward 8 (Anacostia) is in the lower right. Every other map you could draw, from bikeshare rentals to income to education is going to show the same disparity. With this visual, it’s not hard to tell why an “enormous” disparity still exists between black and white people.

I still see proclamations of Washington, DC as the “third thinnest” state, which badly misrepresents the huge disparities here and harms our ability to understand the health of our community.

Why this is not good

A significant inequality still exists and that’s a problem. This means that the opportunity of black men and women to achieve their life goals starting with a long life is blunted compared to white men and women.

Diversity brings with it a torrent of innovation. If this trend does not change, we’ll learn less every day, and enjoy our community and the world a lot less. And why would we want to do that?

We share our community with incredible leaders who don’t support the status quo:

“Until everyone has what they need, we can’t say we are one city.” @casarubydc #health #equality #dc http://t.co/PIb2dJe3ga

I’m with Ruby. We are going to change everything 🙂 .