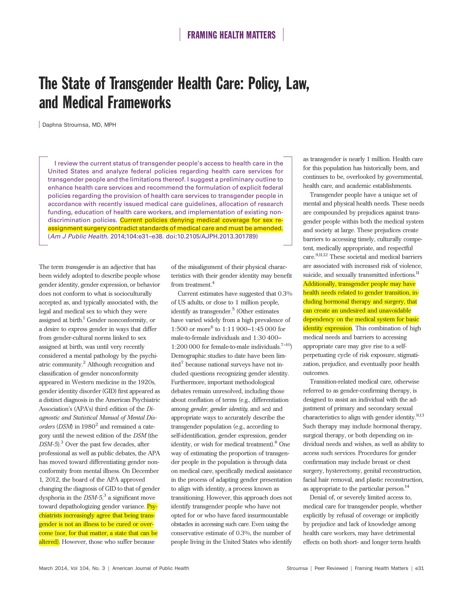 It’s a strong lead off, in this paper published in the American Journal of Public Health, in March, 2014.

Compliments to Keshav Tyagi, who referenced this piece in his recent graduate school assignment (see: Just Read: Need for a Non-Discrimination Statement to Protect the Health of the Transgender Population | Ted Eytan, MD).

Daphna Stroumsa, MD, MPH, who’s at Henry Ford Hospital goes through the history and current state of health care as it relates to people who are transgender and points out some key discrepancies:

the failure to comprehensively address the medical needs of transgender people stands in contradiction to the medical profession’s prized values of equity and respect.

I read this at the same I see articles like this, which publish messages from health care practitioners to patients like this:

She discusses the circular-referential coverage policies that have as their source no current scientific data, as if it doesn’t exist, which results in delayed or no care, increasing costs to the health system, to society, and reducing access to positive exemplars in society, which further exacerbates explicit and implicit bias.

I made a diagram based on the work of Irene Blair, PhD, expert in implicit bias in health care, to show how this comes together, that I’ll include in my presentation on being a trans ally and unconscious bias.

Of course, now that several states are denying the denials of care, more people are obtaining health, life, and are serving as exemplars that are completely reversing this process. It’s great to see.

Besides the useful content in the paper, there’s the knowledge that the number of physician allies is growing, allies need allies, and our generation is going to change everything 🙂 .