At 6:00 pm, when I walked through Oxford, GB with Pete McGrane, the Clinical Director of Oxford Health NHS Foundation Trust (@OxfordHealthNHS), I saw a scene like this in a totally different way. 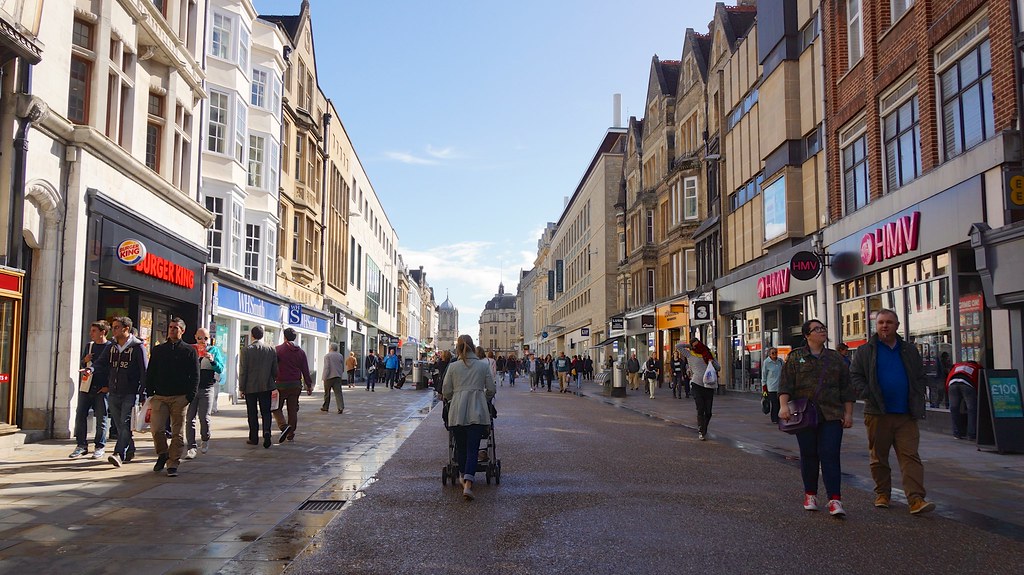 Everyone, from the person wearing the fashionable-and-less-functional shoes, the college student who may be smoking or queueing up to the pub for the night, the family walking, is more or less under your care, not just for health services, but for health, productivity, and living a long, healthy life in a resilient community that you’ve helped support. There’s nothing like this feeling in the United States. Here, on any city street, some of the people are your patients some of the time. Imagine how that changes perspective and feeling of accountability.

As part of what I call my sustainability tour of the UK, I spent a day shadowing Pete and Dr. Dan Lasserson (@DanLasserson) at Oxford Health. I was connected to Oxford Health via the Centre for Sustainable Healthcare, who are supporting Dr. Daniel Maughan (@sustainablepsyc), an Oxford trainiee, as Royal College of Psychiatrists Sustainability Fellow for 2013-15. He’s doing very interesting work in bringing new models of care to mental health – check out the text messaging program in the photos below.

Remember that the pathway to sustainability here is broader than installing solar panels – it involves changing the models of care to be more compatible with a lasting health system and society.

Lots of change going on

I am not going to try and describe the amount of change or the structure of the NHS or Oxford Health because I’ll get it horribly wrong. I think it’s accurate to say that change on a “historic” level is happening here. The population covered here is about 1.2 million people, or Washington, DC-ish sized. It’s also important to note that Oxford Health NHS Foundation Trust is a combination of the Oxfordshire and Buckingham Mental Health NHS Trust and Community Health Oxfordshire – mental health is very much a part of this organization.

As Pete toured me through the Abingdon Hospital campus, he noted the features of the physical plant, which are actually derived from a hospital building method named after Oxford – the “Oxford Method.” (see: Oxford Method Research Programme – fascinating). This itself was an innovation in the early 1960’s in rapid construction of functional facilities based on community need. The challenge in 2013 is that integration may require a different footprint, which is part of managing sustainability moving forward.

It seems wherever you go here there’s a top-of-mind awareness of the frail elderly population and the imperative for them to be cared for safely as close to home as possible. That’s where community hospitals and the Emergency Multidisciplinary Unit (EMU). EMU was developed in 2010, and:

The team, which includes an occupational therapist, social worker, physiotherapist, four
nurses and a consultant gerontologist, provides a holistic service to patients, ensuring that each individual’s physical, medical and emotional needs are assessed and met.

  The team’s three main aims are to reduce the number of people with acute conditions who are admitted to the John Radcliffe Hospital (JR), reduce the length of stay of people with long term conditions who have needed admission to the JR and to provide rapid assessment for those patients who have had a rapid decline in their functional independence.
Since its launch in November 2010 lengths of stay have been reduced by more than 40% and the number of admissions from the area to the JR has reduced by 12%.

This is where shadowing comes in. You can read the above and say, “sounds innovative,” and then you can go there, and see a light filled room with low tables, readily accessible multidisciplinary staff and minimally invasive technology surrounding patients who are calmly resting, playing with children or grandchildren as their cardiovascular/pulmonary systems are being stabilized. Not what you would expect to see in an Emergency Room, which would have been the venue previously.

Dan Lasserson, MD is driving a lot of the innovation here, which involves both the care and the socialization of this concept with the medical community here. It’s another little wrinkle in the NHS that physician groups do not typically assort in a multispecialty way the way they do where I work – primary care and specialty care are somewhat disconnected. Dan and this unit serve as a bridge between the two, which is innovative in and of itself. As in the system I work in, this takes a special kind of talent, to be a credible clinician, group oriented, and with an enterprise perspective.

It’s super difficult to draw analogies between the structure of the clinical/social/mental health web of support for the population here and comparable care in the United States. Generally speaking, there isn’t the integration of social care and medical care here in the US, which can create hurdles. No hurdle is insurmountable, though. What we have in common that crosses structural boundaries is clinicians who are dedicated to health, who’s definition is as broad as the imaginations of the people we serve. And why wouldn’t it be, that’s the brilliance of taking care of fellow human beings :).

If you peruse the Trust’s annual reports, in addition to the quality, cost, satisfaction metrics, you’ll find a Carbon Management plan, which is another unlike-the-US feature of operating a health system here.

If I put together what I saw here plus what I learned at CleanMed Europe, I would say that all of this work is driving toward emitting meaningful carbon, which comes from all people achieving their life goals through optimal health, rather than from the kind of carbon that’s emitted when a patient is taken away from the place and people who they live, work, and play with to manage illnesses or complications that could be prevented.

Thanks a ton Pete, Dan, Daniel, patients, clinicians, staff and people of Oxford for your time and interest in a greener future for generations to come!