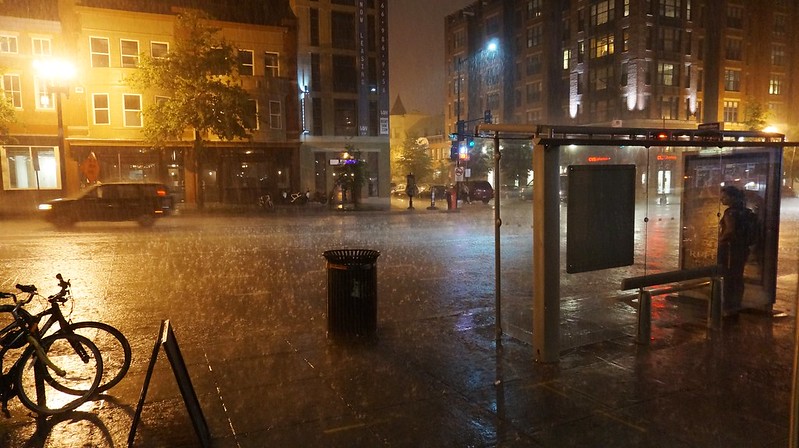 I have always thought that writing status updates about the weather isn’t really useful to anyone, so I avoid it. Climate is a different story.

I took this series of photographs in the U Street corridor of Washington, DC on August 13, 2013. The rain was definitely a paralyzing part of an otherwise gorgeous week.

In my newfound climate change understanding (see: Finished my 3rd MOOC, and moving to renewable Energy in Washington, DC | Ted Eytan, MD), I have a better grasp of the tools and terminology out there, so I did a little research:

Maybe this doesn’t quality as “extreme,”which is defined as “at the extremes of historical distribution.”

On the other hand, the pattern of severe thuderstorm warnings from the National Weather Service shows an upward trend: Source: Is the National Weather Service issuing too many thunderstorm warnings?

…but notice there’s a controversy over whether NWS is overcalling them. However, in the article it also says:

So I don’t know if there was highly localized damage or not. The storm was impressive enough for me to envision challenges for anyone with limited mobility or means to navigate, and the numbers are going up. And, there are some explanations about why the climate is changing due to carbon in the atmoshere, because it is changing (From Heat Wave to Snowstorms, March Goes to Extremes | Climate Central).

And here’s what the photographed storm above looked like in 3D. Enjoy (for now).