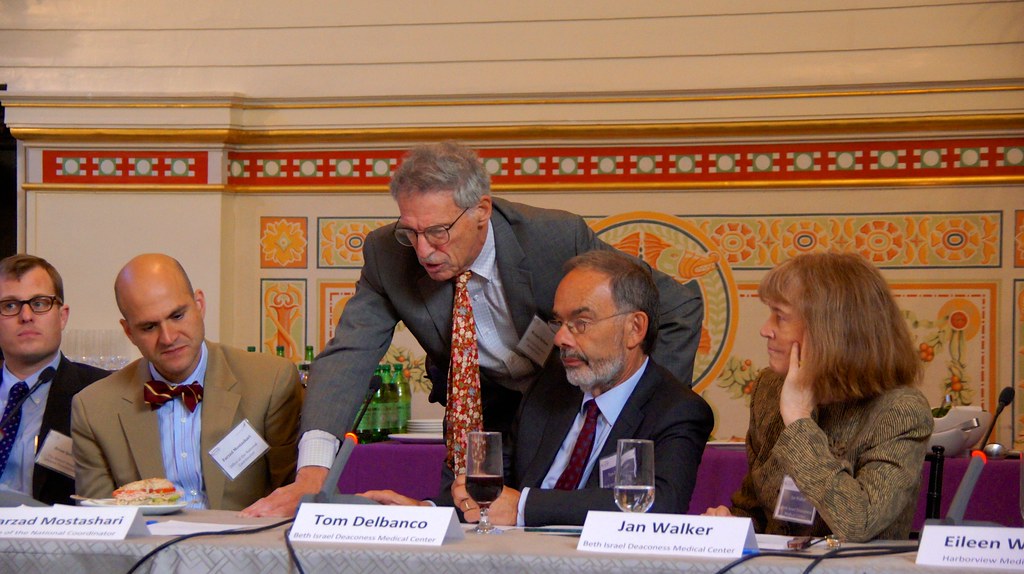 I’ve written a bit about OpenNotes (@myopennotes) already, so I’d like this post to tell a story via photographs.

At one point yesterday, another attendee said to me, “Ted, think about this as theatre,” which I did.

No one seemed concerned or worried on this stage as they talked through one of the biggest changes in physician-patient communication in the last 40 years. The focus was on moving forward, tearing down the wall of information asymmetry, patient exclusion, and what Shenkin and Warner called physician dissatisfaction secondary to poor “patient-physician relations.”  (see: Now Reading: “Concern that sharing information with patients may cause sustained psychological distress is probably unfounded”).

Regina Holliday (@ReginaHolliday) texted me later and said, “wasn’t it super cool to have an easel at the table like that one. Could you imagine it 3 years ago…” It was super cool, and I would also add, reassuring and supportive-feeling. And I could not have imagined it. I wonder if Sheknin and Warner could have imagined it either as they pleaded with their colleagues in the pages of the New England Journal of Medicine in 1973. Probably not.

Enjoy. Oh and one shout out to the researchers who have either mentored or co-mentored me in my own career, including Joann Elmore, MD who I got to have a reunion with, thanks to this project. I openly disclose that I am grateful many times over for the opportunity that the Robert Wood Johnson Clinical Scholars Program created for me to participate with the most incredible patients, physicians, people, dedicated to improving health and health care.