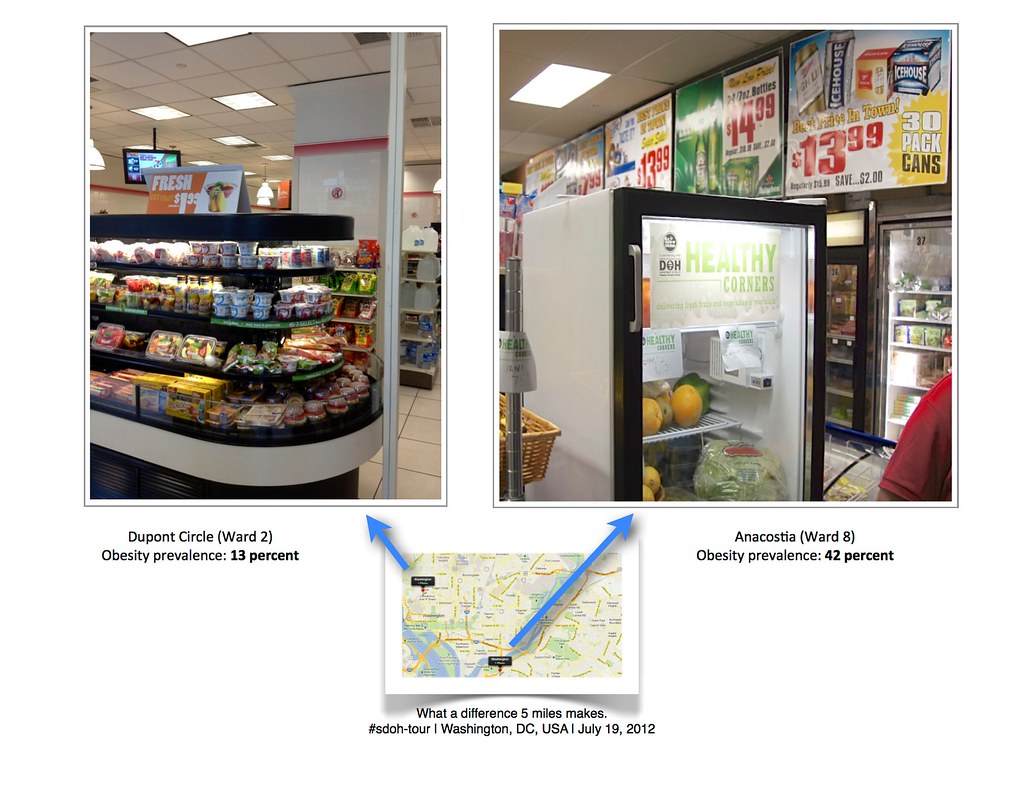 View What a difference 5 miles makes in the social determinants of health on Flickr.com

I’ve already tweeted this and posted to Facebook; however the blog is the official record of the journey :).

I took both photographs yesterday while on a “Social Determinants of Health Tour” (walk) through Ward 8 of Washington, DC, with another physician Pierre Vigilance, MD ( @PierreVigilance ), who was a supremely excellent guide and collaborator given his past experience as The Director of the Washington, DC Department of Health, AND Kait Roe (@kaitbr), patient engagement champion supreme.

I actually didn’t plan on taking the photograph on the left – I happened to walk into a convenience store in Ward 2 and was immediately, immediately taken aback by the difference in appearance and food choices in this store, compared to the store I had just been in. It was a stark contrast to see how convenience stores like the one on the left have morphed into providing healthy choices, dominantly, visibly, compared to the one on the right, which is more challenged.

The refrigerator in the store on the right is not there by accident. It is part of the Healthy Corner program, which you can learn more about.

I don’t want to imply that Washington, DC is not innovating in this area or that there’s no hope. The goal of the tour was to uncover and show visually what a lot of people don’t realize when they see only data or think that technologically mediated lifestyle reminders are the answer when it comes to obesity.

I’ll post more ( a lot more ) about the social determinants of health tour in the next few days. It involved reviewing data and then going in person, because googling and reading blogs can only go so far.

I found this appropriate quote in one of the blogs I researched in advance of the trip:

It is very telling (and a little demoralizing) to sit in a meeting with organizations (including DC agencies) discussing important Ward 8 issues (like unemployment and economic development) and realizing that not one of them lives in our community.  I think that some of the missteps we have seen in Ward 8 can be tracked back to the lack of representation in the decision making positions. To quote Boyz n the Hood, “Either they don’t know, don’t show, or don’t care about what goes on in the hood.”

You can’t Google the East of the River experience.  My blog may bridge part of the gap but it doesn’t come close to filling the void. East of the river engagement is an “on the ground”  and “in the streets” type of operation.  It involves many different perspectives and skill-sets (and maybe a confrontation or two).  The strategies and tools that may be successful in Columbia Heights may not translate in Congress Heights. You can’t expect a community that has been disenfranchised for a generation to come running at the first mention of a community meeting. It will take more than free hotdogs to get people excited about the Saint Elizabeths project. And you can not,  for the love of all things holy,  continue to engage people to do community outreach east of the river who do not live or work east of the river.

From: Consider This an Intervention, Congress Heights on the Rise Blog, July 17, 2012

@jnh143 An idea from PuraVit to add some veggies to your day…. http://t.co/vSxUwOoP