The first photograph is one I took, in Washington, DC. 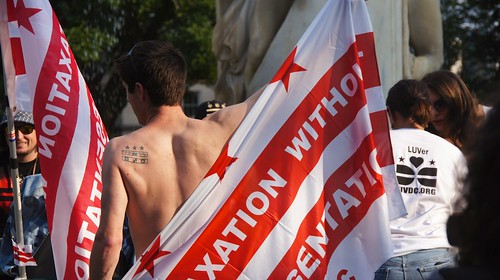 For a description, this is my tattoo that represents where I come from. My name is Jeremy Plesser and I was raised in DC. The top bar is in memory of my childhood friend, Vince Carroll, also a DC native, who passed away in 2007. His favorite band was Pink Floyd so this is “another brick in the wall” with one missing for Vince. The bottom bar is in memory of my father, Ronald Plesser, who passed away in 2004. It has the nautical flags for his initials (RLP)

People who grow up in Washington, DC, have a different civic experience than those of their peers in other states. Their feelings of disenfranchisement are real, their hope to be experience equality are as strong as the human spirit can be.

The second is a photograph that I didn’t take, and it’s not from Washington, DC. It just is. 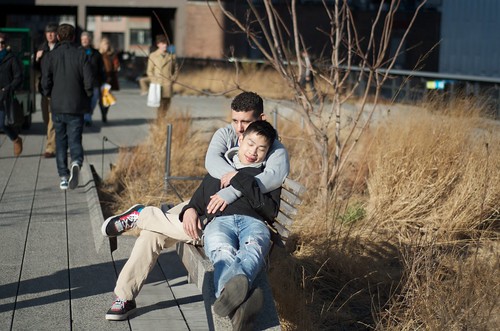 “Same-sex couples should be able to get married.”—President Obama
— Barack Obama (@BarackObama) May 9, 2012

[email protected]imgoph I lead b/c I’m passionate about LGBT equality & saddened some people still don’t see it as the civil-rights issue it truly is.
— Vincent C. Gray (@mayorvincegray) March 30, 2012

In 2012, for the first time, a majority of Americans now support equality.

Ted, in thinking about transforming the culture of healthcare, I’ve been wondering about the timeline of social movements, from their first public mention to first uprising (public demonstration) to first majority to ultimate acceptance, by the public and in law.

First, some background, then a couple of questions.

<b>Women’s suffrage</b> took most of a century. (Wikipedia <a href=”http://en.wikipedia.org/wiki/Women’s_suffrage” target=”_blank”>says</a> it was seeded in 1840, was ratified as an amendment in 1920, and was in the UN’s Declaration of Human Rights in 1948, 108 years after the start. (The suppression of women was so complete that within the labor movement, WP says, an 1868 vote about including women was even deleted from the record.)

And of course the ERA still failed to win ratification, thirty years ago, so THAT job ain’t done yet. And we still have pay inequality; and that’s just the U.S., not to mention other countries, and cultures where “honor killings” are still tolerated.

<b>The civil rights movement</b> (re racism) certainly existed as an issue long before the Civil War, though Wikipedia <a href=”http://en.wikipedia.org/wiki/Civil_rights_movement” target=”_blank”>says</a> the movement per se was mostly between 1950 and 1980. Yet a generation later, last week’s incredible NY Times piece <a href=”http://campaignstops.blogs.nytimes.com/2012/06/09/how-racist-are-we-ask-google/”>How Racist Are We? Ask Google</a> documented that in states where the word “n—-” (edited by Ted)  is googled a lot, Obama scored as much as 9 percentage points lower than expected compared to other states.

That’s about 200 years into that movement.

Why does this happen, and how? In the 1988 film <a href=”http://en.wikipedia.org/wiki/Mississippi_Burning” target=”_blank”>Mississippi Burning</a> a scene at the end shows that a culture of prejudice is <i>taught</i> to the next generation.

And now on to gay rights. My personal consciousness on the issue began with the Stonewall uprising – last year I saw the superb <a href=”http://www.pbs.org/wgbh/americanexperience/films/stonewall/” target=”_blank”>American Experience piece</a> on PBS. Stonewall happened in the summer of Woodstock, the moon landing, 43 years ago.

Question 1: do you know of earlier stages in the movement, before Stonewall?  The earliest “out” figure I know of is Quentin Crisp in the 1930s, 80 years ago.

Question 2: while I don’t (yet) see the patient empowerment as outright cultural suppression, what do you think of parallels with the other emergence movements, both in attitude and in timeline?

Finally, do you know anyone who’s studied the structure of such movements – identifiable phases, etc?

I’m aware that social movements have been studied in depth, I actually took a whole semester class in the topic in public health school…hmm I was even interested in them back then.

I avoid trying to connect movements, just because I feel the risk of not understanding the nuances is too great, so I stick to what I know which is that:

1. Equality for LGBT is not over – I recently experienced a misinformed/biased approach to this group by a fellow health care professional. This still shocks and saddens me, mostly because of the other person’s inability to appreciate a healthy world view.

2. I will continue to use the camera to capture the human spirit.

3. Whatever privilege I have, including the two letters after my name that they can’t take away, I’ll use to make sure it gets better.

[…] compared to 1992, he’s now channeling the majority view of Americans asked about this (see: Photo Friday: Picturing Equality | Ted Eytan, MD). At the same time, to see a sitting governor place this importance on equality […]