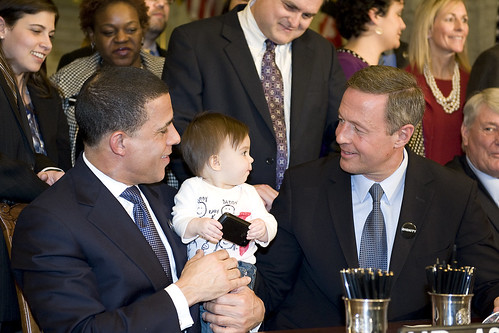 Compared to the last Photo Friday featuring Maryland Governor Martin O’Malley, this photograph features him winning the passage of the Civil Marriage Protection Act of 2012.

Here’s the video of Governor O’Malley signing the bill into law, and his remarks underneath it. Maryland is State #8 to end discrimination in the United States.

“For a free and diverse people,… for a people of many faiths,… for a people committed to the principle of religious freedom,… the way forward is always to be found through greater respect for the equal rights of all; for the human dignity of all.
“Religious freedom was the very reason for our State’s founding. At the heart of religious freedom is the freedom of individual conscience.
“If there is a thread that unites the story of our people, it is the thread of human dignity; the dignity of work; the dignity of family; the dignity of every child’s home; the dignity of every individual.
“We are One Maryland, and all of us, at the end of the day, want the same thing for our children: to live in a loving, stable, committed home protected equally under the law.” – Statement from Governor O’Malley