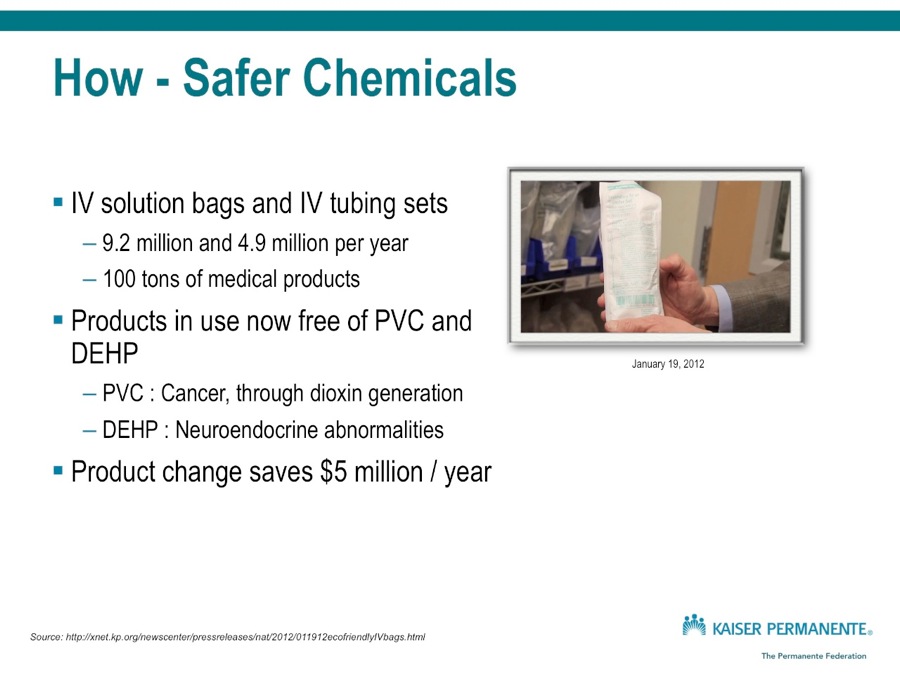 This is Part 2 in a series. See the original post here.

The image of Intravenous (IV) equipment (bags and tubing) is one that feels healthy – medicine dripping into the veins of a person in need. And this is what health care uses IV equipment for, successfully, for lots of people. Except that the use of this equipment can bring unwanted travelers into the veins of our most vulnerable patients.

Kaiser Permanente announced a product change on January 19, 2012, that will keep one of these unwanted chemicals, DEHP, from the veins of patients and reduce the use of PVC in the medical products overall. (See: “Kaiser Permanente Moves to Green Medical Supplies by Converting to Eco-Friendly IV Equipment“). As the slide above says, this will affect 100 tons of purchased medical products per year, and the product change actually saves $5 million over the previously-used sets. Here’s why this matters:

PVC (Polyvinyl chloride) and DEHP di(2-ethylhexyl) phthalate are both widely used in medical products and have been shown to have harmful effects on health. From the FDA’s website (FDA Public Health Notification: PVC Devices Containing the Plasticizer DEHP): “PVC is a plastic polymer that is used in a wide array of products. Unplasticized PVC is hard and brittle at room temperature. A plasticizer (softener) is typically added to increase the flexibility of the polymer. DEHP is the plasticizer for most PVC medical devices.”

DEHP is known to leach from the equipment to the bodies of people attached to it, and the longer you are connected to the equipment, the more DEHP enters your body. This is especially problematic for neonates, and male neonates, as the FDA states:

Exposure to DEHP has produced a range of adverse effects in laboratory animals, but of greatest concern are effects on the development of the male reproductive system and production of normal sperm in young animals. We have not received reports of these adverse events in humans, but there have been no studies to rule them out. However, in view of the available animal data, precautions should be taken to limit the exposure of the developing male to DEHP.

The FDA’s initial public health notification went out in 2002, and these products are still widely used in health care. (they updated information in 2009: “DEHP in Plastic Medical Devices“).

PVC brings harms as well. Its manufacture and incineration generate dioxin, one of the most potent carcinogens.

I’ll be showing a 40-second or so clip from this longer video discussing the change and why it is important:

This work is part of a larger effort known as the Kaiser Permanente Sustainability Scorecard, which requires suppliers to provide environmental data for $1,000,000,000 worth of medical equipment and products used in its hospitals and facilities.