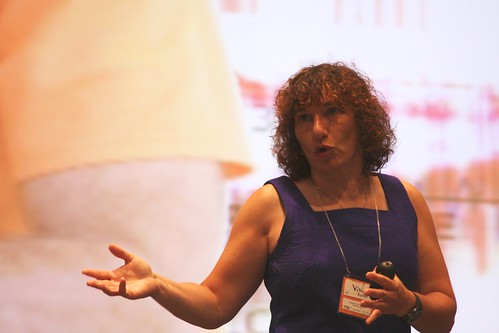 I first met Vivian Distler in 2009, when she reached out to me via my blog on the recommendation of Susannah Fox to participate on a panel at Institute for the Future’s Health Care 2020 event (power of social media). I did indeed attend and connected with some really wonderful people, including Vivian (see: “Photo Friday: Check the Accuracy of Your Message – Have it Drawn For You“).

It wasn’t until South by Southwest, 2010, that I had an actual sit down conversation with Vivian, though. We sought each other out with me, lost in the Austin wilderness of über-connected interactives, and we talked about, what else, the future. In my somewhat typical Ted style, I think I may have worn her out a little, however, I still remember that conversation on the hotel couch, with all the craziness around us. ( @KristinJuel , you were there too, remember ).

Vivian played a much bigger role in my life experience at the Innovation Learning Network in person meeting in Wichita, KS, in 2010, where the photograph above was taken. She was a deeply thoughtful person with a level of patience and interest in things new that made you just want to hang out with her.

More recently, she led a session at the Kaiser Permanente Center for Total Health on Alternate Futures with Institute for the Future’s Rod Falcon. And I’m going to be honest, I sort of woke up that morning wondering if I would get to sit in the back and soak up the knowledge. When I arrived, though, I knew instantly I would be participating at my fullest capacity, in what turned into a phenomenal session. I am still referencing the material we worked on that day. You can see the results here . My point of view is officially changed. (see: “IFTF Comes to the Capitol: Health Horizons’ Alternative Futures Workshop & SuperBetter Event | Institute For The Future” )

I found out that Vivian died over twitter, (from this tweet sent by @healthythinker) and I immediately thought “she can’t be gone….we weren’t finished.”  Vivian was a person that you wanted to have around you, to learn from, to laugh with. I can’t explain it, but that’s what it was.

I did a little bit of electronic forensics to capture some of our past communications with each other, and I found this message from her to me in September, 2011. It was just this:

You can learn more about Vivian’s life, and how to remember her via her favorite organizations at Institute for the Future’s web site.

Very sad to read this. Never got a chance to meet her; I just found out by following a link from a futures website.

A beautiful remembrance.  Rest in Peace Viv.  Rest in peace.

Such short words; and yet more touching than any essay.  What a beautiful person.

[…] Eytan is a wicked smart guy. So I’m not surprised that he managed to write something so totally on-pitch about Vivian. It got me thinking about beginnings, too. Vivian was hired at IFTF about a week […]