Blah Blah Blah: What To Do When Words Don’t Work (Dan Roam)

(Feel free to also find it in e-book form at your local library: http://search.overdrive.com)

At the most recent Innovation Learning Network ( @HealthcareILN ) in person meeting at @KPGarfield, my personal innovation rockstar, Chris McCarthy ( @McCarthyChris ) approached the small group I was designing the future with and did/said two transformational things. He said, “stand up,” and then “draw pictures.” He took a flat text list of ideas and converted us into thinking vividly in 10 seconds flat (see the photo on the left). 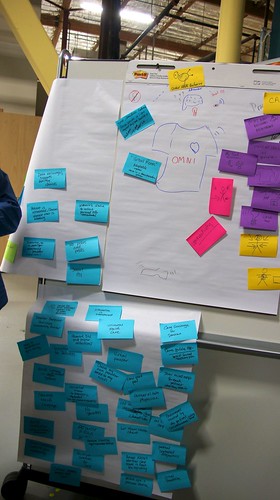 This book is all about that, giving structure to something I have always thought important in my communication – the visual (it’s why I often pull a camera out of my bag…). Blah Blah Blah is actually the sequel to “Back of the Napkin

,” also by Dan Roam, which Chris recommended to me previously (of course, it’s all connected). I just finished reading “Napkin” and started practicing the techniques there and found it a great start…but a little hard to take to completion. Blah Blah Blah fills that gap for me.

You can see in my past work developing A3 project plans that there has always been a visual, based on a general understanding of my audience and the type of simple information I have wanted to convey. In this approach, VIVID = “Visual + Verbal , Interdependent,” which means that we appeal to the part of the mind that processes verbal information (personified as a fox) and the part that processes visual information (personified as the hummingbird), and go through steps to form, simplify, extend, target based on what we’re trying to show and who we’re trying to engage. The forms include things scientists are comfortable with, like charts, flow diagrams, and multivariable plots. Also smiley faces, natural images, images of people, a good combination. Because the book is about being Vivid, it is written vividly, with a lot of pictures :).

The results are images that a person can draw on a napkin, and the killer app turns out to be a pencil (or pen), a ruler, and a good eraser. A little bit more bulky than an iPad but worth a try. Get rid of the bullets and take a look!