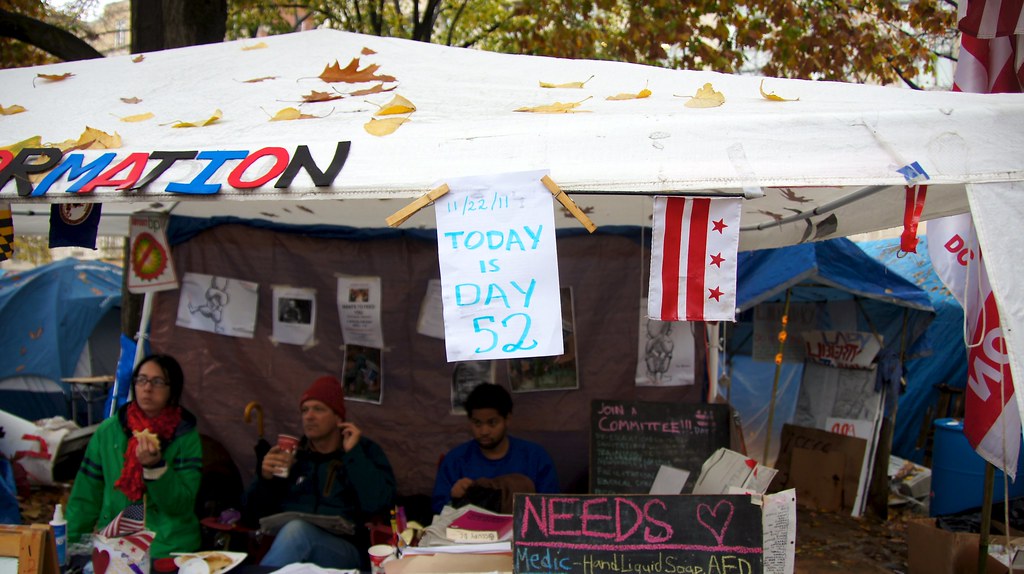 I have been wondering why California Occupy camps have been igniting in violence and conflict, while Washington, DC’s camp ( @occupy_DC @occupyKst ) seems to coexist peacefully with the surrounding community. These two outcomes make me curious about leadership.

There’s no pepper spray here, the camp is 53 days old today, the first time I walked through it (it’s in the middle of the city) I was immediately amazed. It feels like a community, it is hard to explain. There’s actually a dentist’s office on site, with community dentists providing care on the weekends. There’s a kitchen, of course, and there’s sanitation – and this is where differences start to emerge.

It appears that the National Park Service, with responsibility for McPherson Square, made the decision to engage with the residents here. You can see posted signs informing them of proper sanitation procedures, along with portable toilets, adorned with signs by residents urging clean habitation (see photos below). There is a police presence nearby, but no conflict.

I found some articles that describe the differences, including the conscious decision by the City Council to engage, rather than fight, the residents. The space itself is in a relatively unused part of the city and the camp actually brings activity to a place that formerly had very little. There’s even some urban planning going on within the Square.

I recorded an announcement a few days ago, by a resident who had approached local Metropolitan Police Department leadership to clarify behavior that had been seen, and the response provided was, “Thanks for telling us,” and no conflict.

Yesterday I asked one of the residents if my hunches were correct. She said she has noticed increased police presence, but there has not been conflict. I asked about health care. She said there was a medical tent right behind us. You can see the list of needs on the board, which includes an Automated External Defibrillator – they are thinking safety. I asked if anything was not going well. She said, “This weather” (it was raining). We were interrupted at that point by a human mic announcing that the DC Department of Health was coming to do a health inspection. All of this happened while we were standing in front of an Information tent, where information was being given out (just like it said).

I think it’s great to have an example, here in Washington, DC, of a different kind of leadership in an environment of dissent. Here, the results are less conflict, more collaboration, less harm, more speech, less failure, more success. For now. Also, less press coverage. I hadn’t seen these differences written about, so I decided to create this post.

From a leadership perspective, I think the Occupy movement may well result in a few textbooks (or whatever format knowledge will be in in the future) being written about how to lead.

As usual, I see many analogies to health care (and life in general).

Photos of the above plus links to the articles cited are below. Click to enlarge. Let me know what you think.