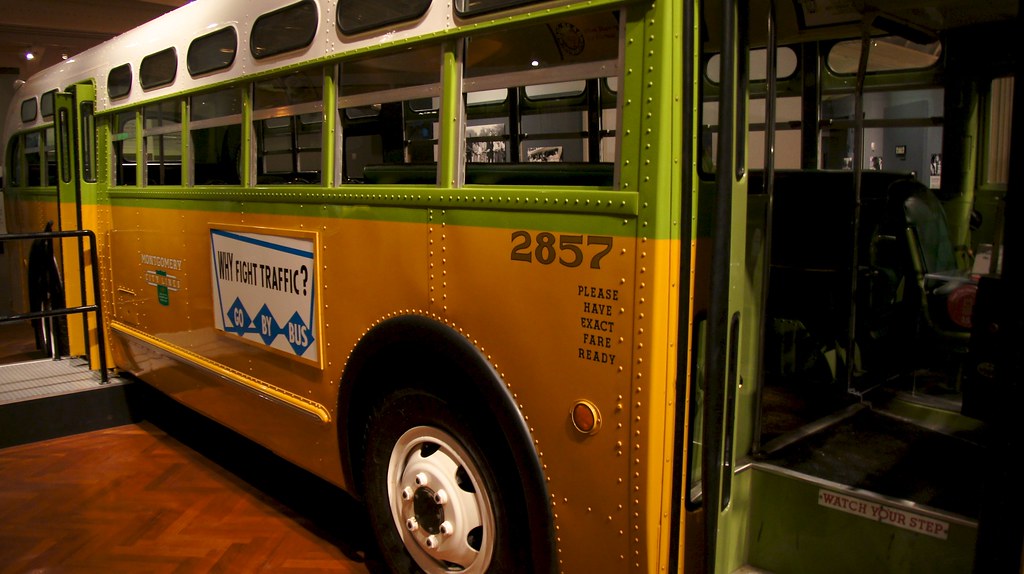 This week’s photograph was not taken in Washington, DC – I’m making an exception because it relates to diversity. I took it at The Henry Ford ( @TheHenryFord) in Dearborn, Michigan, from the perspective of its most famous passenger, Rosa Parks (and it’s in a relatively confined space so difficult to get a wide angle view).

I actually didn’t know the bus was there until I went to check in on Foursquare and it popped up as a location within the museum (2 snaps for social media). I immediately asked to go see it.

You can’t help noticing the sign on the bus (“Why Fight Traffic, Go by Bus”), which is playful and fun, part of a system of bias and violence directed toward those who broke its rules of segregation. The bus is surrounded with other artifacts of segregation, which are in the photos below.

Inside the bus, you can hear a recording of Rosa Parks being interviewed after the famous incident on December 1, 1955. What I heard was a tone of defiance mixed with the feeling that her heart was racing as she told the story. Rosa Parks was 42 years old in 1955.

I asked the “why” of a display like this in a place like The Henry Ford, and I really liked the answer. Since The Henry Ford is about American innovation, and the original innovation is the creation of America itself, it was felt natural that the story of the journey to achieve the ideals of this innovation should be told here.

When I sat in the seat that Rosa refused to vacate, I immediately flashed back (forward) to Regina Holliday’s piece, “The Death of the Paper Transfer,” where she portrays the inequity of our health care system, which could not accomplish what the transit system in Washington, DC did, when it achieved interoperability in bus-metro transfers in 2010. I decided to bring up an image of the piece and photograph it on the seat, just to think about how the the seat on this bus has taken flight and inspired people 56 (!) years later…

You can see the story behind the bus at The Henry Ford here.

Just Beautiful Ted. It is amazing how each life touches the other.

[…] Rosa Parks, Revisited – NYTimes.com – This article confirms what I heard inside the Rosa Parks bus. In the exhibit at The Henry Ford in Detroit, Michigan, an interview of Ms. Parks that occurred shortly after her act of civil disobedience is played inside the bus. I’ve heard the interview twice, and to my family doctor ears, I have felt that I wasn’t listening to a timid, tired person. Here’s what I wrote in 2011, on my first visit to the bus: (see: Photo Friday: Why fight traffic, fight discrimination instead, The Rosa Parks Bus @thehenryford | Te…) […]