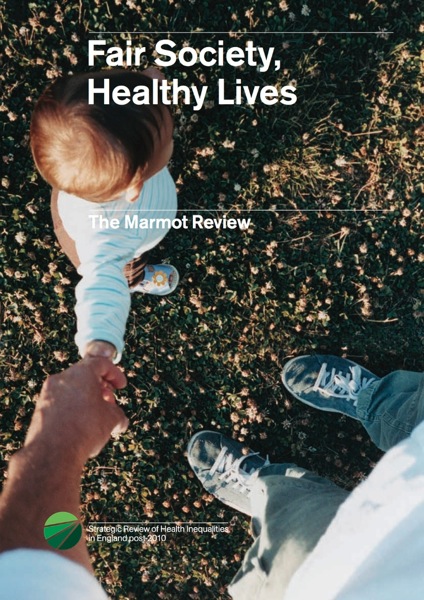 ….attempts to reduce health inequalities have not systematically addressed the background causes of ill health and have relied increasingly on tackling more proximal causes (such as smoking), through behaviour change programmes. Part of the explanation for this emphasis lies with the comparative ease of identifying action to address behaviour, rather than the complexity of addressing social inequalities shaping such behaviours. This has led to the seemingly less challenging route of lifestyle interventions – this tendency has been described as ‘lifestyle drift’.234 The emphasis has been either on downstream actions that affect only a small proportion of individuals, or on approaches that have a socially neutral impact at best. Health inequalities are likely to persist between socioeconomic groups, even if lifestyle factors (such as smoking) are equalised, without addressing the fundamental causes of inequality

I came to Sir Michael Marmot and the Marmot review via social media – he’s not really well known in the United States even though he’s the recent past President of the British Medical Association, but I think his work and writings are very compelling (see what he wrote about spending time with The American Medical Association here).

I actually asked this question on Quora.com in the quest to understand whether current trends in gamification, mobile and the like are really the answer to societal health problems. I was referred in an answer to my question to this review, which I read from cover to cover, and enlightened me to both a new world of information and connected me to experiences I have had in my public health work as well as connections to other industries who are engaged in improving health, too.

The work, commissioned in 2008 by the British Government, is replete with extensive reviews of the data and some very important concepts that I think can and should extend the current thinking of the American health system.

In American health care, we tend to focus on measures that are more about process of care, such as “did the patients receive their antibiotics on time.” A health system typically does not measure itself against its ability to enhance not just life expectancy, but disability free life expectancy, and more importantly the gradient across the socioeconomic status. What do people want to say is success for them in terms of their health? Look at the data for England:

It’s not about absolute income, it’s about the gradient in social status conferred by a host of factors

It’s noted that “India, 76% of the population live on $2 a day or less, yet men in India, on average, have longer life expectancy than the poorest men of Glasgow and about the same as men in Washington, DC.“

“Such systematic differences in health do not arise by chance, and they cannot be attributed simply to genetic makeup, ‘bad’ behaviour, or difficulties in access to medical care, important as these factors may be. Social and economic differences in health status reflect, and are caused by, social and economic inequalities in society. The Commission on Social Determinants of Health (CSDH), set up by the World Health Organisation, concluded that social inequalities in health arise because of inequalities in the conditions of daily life – the conditions in which people are born, grow, live, work and age – and the fundamental drivers that give rise to them: inequities in power, money and resources.”

What to do entails addressing social determinants, which means collaboration beyond the health care system

Variation in the distribution of expenditure on childhood education by age in selected European countries, 2003

What this situation describes is an opportunity to attend to the abilities of adults of the future by attending to them in early, as opposed to later childhood. Data presented shows that children with low cognitive ability at age 22 months from a family with high socioeconomic status will recover to a point that they will cross children with high cognitive ability at age 22 months, who will show a significant decline.

The other areas of action include creating “fair employment and good work” which includes the physical as well as psychological work environment, enrusing a healthy standard of living by better defining what an income for healthy living is, and strengthening prevention, and not just for the most disadvantaged, across the entire gradient.

Besides these areas, I was interested in the emphasis on “creating and developing healthy and sustainable communities.” This is where actions including promoting active transportation (biking and walking), access to food, and also things that are currently underemphasized in American health care – the impact of climate change and CO2 emissions. Even in the specialty of Nephrology, for example, something can be done – witness the UK’s Green Nephrology Programme, which works to reduce the CO2 footprint of very intensive medical interventions.

Where does behavior change fit in?

It is in here, in the context of creating the right conditions for this to be successful:

This Review puts empowerment of individuals and communities at the centre of action to reduce health inequalities. But achieving indi- vidual empowerment requires social action. Our vision is of creating conditions for individuals to take control of their own lives.

I think the key message is that this individual action should not be seen as the dominant approach to improving health:

As this Review has demonstrated, policies to modify health behaviours need to address the social determinants of health. Aiming interventions at individuals will not by themselves reduce health inequalities; ‘responsibility for better health should be shared between society and the individual

What can be done differently?

Part of the solution is to think differently. Several of the seminal reviews of the causes of impaired health moved the the discussion away from “medical care” to health promotion and health behavior. The excellent paper by Schroeder from 2004 begins a conversation that goes one level deeper, the determinants that guide and shape the behavior. This report fully vests that concept.

The other part is for the system to behave differently, to collaborate more. There is a natural incentive in England’s NHS to collaborate with the social care system, and yet there are still challenges: “Currently, GPs, like most primary care services – community health services, dentists, pharmacists and opticians, do not see tackling the social determinants of health inequalities as core business.”

And yet, many of the social determinants are better addressed in collaboration outside of the health system with the result being a more effective health system. As I’ve discussed previously on this blog, the health system is under-equipped to manage the “Unmentionables,” and maybe it shouldn’t, by itself. (see: “Are your bills making you fat?”)

What others have said

I am not the first person to read the Review of course, and there is copious commentary available online in the scholarly literature, which you can access courtesy of the link cloud (see: my links related to the Marmot Review) that I have created. I’ve read these pieces as well, as well as Sir Michael’s response to various critiques (does poor health result from social status or is it the other way around?) and I believe this data should be understood before we create the next great behavior change intervention that targets the already-engaged.

I’ll end this blog post with a quote from Andrew Lansley, the UK Secretary of State for Health, in response to this review.

There will be a profound shift in tone, attitude and outlook. Rather than nannying people, we will nudge them by working with industry to make healthy lifestyles easier; rather than lecturing people about their habits, we will give them the support they need to make their own choices; and rather than dictating policies from the centre, we will support leadership from communities, by giving local authorities more power to develop the right approaches for their communities.

Will our health care system be able to do this? Either way, I think I’ll be following the adventures of Sir Michael for a really long time.

[…] I think we still need to think about technology as an enabler at the right time / place , everyone is necessary, and the hard work of looking at the causes of the causes of poor health is not going to go away (see: Now Reading: Why a focus on lifestyle behavior change may not improve health: The Marmot Review | Te…). […]