Photo Friday is a weekly post about things I see in and around Washington, DC. This week’s photograph is of Danielle Leach (@teaminspire), who is the Director of Partnerships at Inspire.com (who I have written about previously), in front of the walking wall at Center for Total Health, where she and I were yesterday.

About 2 weeks ago, we were both prepping for a panel discussion at the Washington, DC Social Media Club, in our roles representing Inspire and Kaiser Permanente, respectively, and we began talking about an event she is working on, “46 mommas shave for the brave,” where 46 mothers of children who have fought or are fighting cancer, who go bald to create visibility for their children and children like theirs who are fighting for their lives.

Danielle was talking to me about the pediatric cancer community and she told me,

As she said this, I saw a tear in her eye. We then recomposed and had the planned dialogue with the social media club, which was great. Mason Leach died of medulloblastoma in 2007. 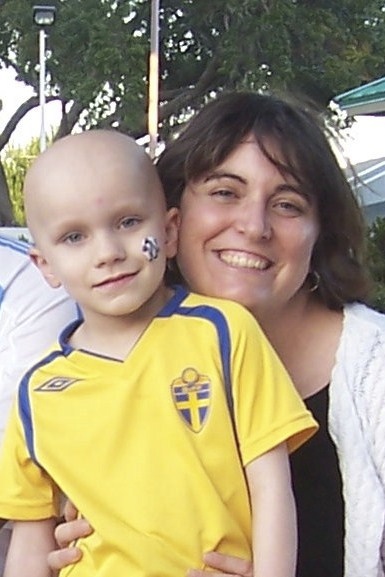 I think this post is about Washington, DC, because of where Mason’s family lives and works, and also because we are the nation’s most social city, in the 3rd most extroverted State in the Union. People readily bring loss , and really a lot of their health and life experiences, into the conversation here, whether through the creation of physical  or emotional monuments, big and small (see a few examples here), and it makes them better community members, leaders, inspiration for others, and ultimately shapers of a community that is unafraid of the future. This is a huge reason why DC “works” for me.

46mommas will be doing their Shave for the Brave in Washington, DC this year, this September. Video of the last shave is below. Links to Mason’s story as well as photos are also below.

These also lead me to comment on health care, and the bond between parent and child, probably the strongest there is in the human species. The video shows it well, and as Danielle commented to me while touring the Center, “When your child has cancer, you have to become an oncologist, too.” Health care’s job has to be to unlock and use that energy as much as possible for healing, because getting in the way of it is foolish. And why would we want to, love always wins.

Thanks Ted for this. It is true, one drug approved for pediatric cancer in 25 years. My son and sister were treated with the same arsenal of drugs : vincristine, cisplatin, carboplatin. We have not changed all that much how we treat children in that time. We only give them higher doses at a greater lifetime cost. We take them to the brink of death in the hope of saving them

46 Mommas supports the St. Baldrick's Foundation, the largest funder of childhood cancer research outside the gov't, to create change in how we treat our children with cancer.

We look forward to having you join us at the shave in DC in September.

Thank you. Thank you for honoring this mom and the 45 others that will be at her side in September.

Thank you for honoring the 46 families that will hear these words, today: "Your child has cancer."

Thank you for honoring the kids of the future.

I hope you make it to the big shave in September!

Thank you Danielle and Mindi!

I plan to make the shave in September, thank you both for your encouragement (and courage).

Your comments made me remember two things from my past-

Danielle – Andrew Weil, MD was on faculty at my medical school and he made a statement that I will never forget based on his hope that allopathic ("traditional") medicine would develop newer, less toxic treatments. He said, "In 20 years, we will look back at what we did to cancer patients and be aghast." It is now 20 years later. Did we achieve the goal?

I trained on a general pediatrics ward that integrated pediatric oncology. I had incredible pediatrician mentors who taught about caring for parents/families as much as children.

They made sure that we did not become family physicians without feeling the impact of those words, and understanding, as you point out, that they are said every day. The feeling about it comes from that part of the brain that can't put things into words. Maybe this is one of the reasons that the shave creates a strong connection.

See you in September if not sooner,

Thanks for sharing.. it is such a sad story and I truly wonder why there has been next to no change in drug/treatment options for children. Is it because the population of pediatric cancer patients is much smaller than adult cancer patients? May it be less lucrative for pharmaceutical companies to devote their resources here? 🙁 Again, thanks for sharing.