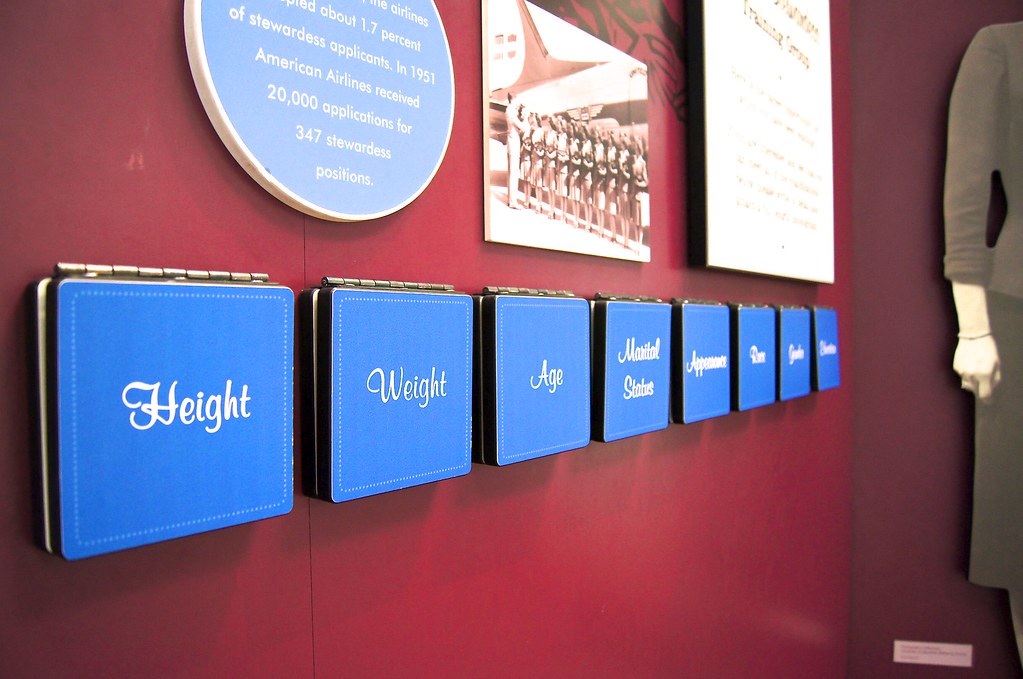 Could you be a stewardess? Display at National Air and Space Museum. View on Flickr.com

I can’t help that I am always drawn to the people side of technology. I took this week’s photograph at the National Air and Space Museum ( @airandspace ), when I bypassed all of the fancy flight machinery to focus on this exhibit, attached to an American Airlines DC-7. It’s called “Could you be a stewardess in the 1950’s?” I called it “You could be a stewardess, if…” in my head.

The blog on the Smithsonian web site refers to this as a “fun online checklist.” When I think about the fact that this is a list of attributes used to keep people from reaching their potential, based solely on who they were instead of what they could do, I have a feeling a lot of Americans didn’t see the fun of a list like this.

I tend to be drawn to these things because they remind me that norms change, and what seems impossible, like a married woman working as a flight attendant (or a nurse), any woman working as a physician, or a patient without a college education accessing and understanding their medical record can go from a “why would we” to an “of course we should,” sometimes overnight. We just have to believe in the new norm.

Ironically, the flight attendant situation is actually a regression from the equality that existed previously, and portrayed so beautifully by another government agency, The Library of Congress, in this photograph from 1942:

I wrote about the Flight Attendant profession previously, among the first posts on this blog (“Working the Skies,” and “Femininity in Flight“) – if you want to understand diversity better, the story is definitely worth learning. Today we’re seeing changes like this, “the end of if…” in our nation’s military.

The rest of the display, along with images of the work environment are below. With gratitude for @airandspace in bringing the history of people to life alongside the history of the technology.