I was delighted to re-connect with Bernard Roberson, who is now the Administrative Director of Patient Family Centered Care at MCGHealth, at the recent AHRQ Innovator’s Meeting. 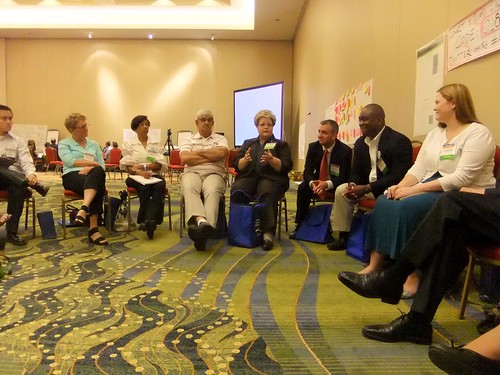 In my opinion he and the two patients he came with stole the show (or at least part of it), and via the magic of open space networking, it’s possible to know this because their group got many “votes” in the 3×5 exercise.

He told me very soon into the session of the death of Pat Sodomka and I was instantly saddened. Her assistant Kathleen Grant was kind enough to send me a link to this tribute, which I am reposting here.

And, everything Jim Conway relates in his tribute correlates with my experience, and I feel so fortunate to have spent time with her team at Medical College of Georgia, in Augusta, GA. (my photos and descriptions are here).

Why? Because of Pat’s approach to leadership and her accomplishments. I recall asking her “why?” she championed patient and family involvement – what happened at MCG to made this happen? Who was MCG’s Josie King? It turned out there wasn’t one – here is what she said to me then via e-mail (quoted in my blog from 2008):

What started this and kept it going and I may have told you this in a way is that we developed a value around the inclusion of the patients voice in our work from the beginning of the design process for the new childrens hospital. I personally was a senior executive back then and I was utterly transformed by the power of the patient’s (in this case, parents and children) perspective on what mattered most in care and I could see that this was a strength that we were denying ourselves as executive leadership. We also had very good mentors way back then in Bev Johnson and the Institute for Family Centered Care and I think we were just open to learning. Because I became so committed and over time could show the hard results in terms of outcomes so did the rest of our leadership. I think it is really that simple….just persistence over many years, Ted.

It really was that simple to her, and she worked very hard to help others see how simple it was, too, to give families 24 hour access to their loved ones in the hospital and involve them in every decision, infusion of medication, and leadership of the health system alongside nurses and doctors. It’s possible for any hospital to enjoy the breakthrough performance that MCG has through the lessons learned from Pat’s legacy. I’m looking forward to it. Let’s start in the #epicenter, who wants to join?

And thanks again for offering your daily email digest.

Do you know who Pat Sodomka was? @TedEytan post from AHRQ Innovators Conference http://bit.ly/bY4egO

Thanks, Paul, for the acknowledgement, and work to continue this legacy!

So, when do we get to come visit and get ideas? I know a few DC patients who are interested in learning, along with myself.

Also, do you have a sense of hospitals in DC that are doing this work that we could partner with?