Blame it on Modern Family, which was the public relations straw that caused me to purchase Apple’s latest iDevice. Interestingly, the gentleman in front of me in line also purchased a Newton Messagepad as his first tablet, for the price of….about $700. That device was way ahead of it’s time; this one probably isn’t.

In any event, here’s a quick rundown of what I’m finding so far.

There may be 150,000 iPhone apps; however, you still have to start over

It’s true that iPhone apps run on the device (except if they require a camera, obviously); however, they just don’t look good. The compulsion, therefore, is to replace them with apps that look and feel right on the iPad. And…it seems like the iPad apps cost more.

In some cases, an app of any kind is made moot by this device. One example for me is DailyBurn. It’s much easier to use Safari on the device than the app to enter in nutritional or workout information.

Content consumption is getting harder these days, this makes it easier

Some writings about this being a “content consumption” rather than “creation” device seem to imply that this is not a worthy function of an iDevice, but I think it is. It’s hard to consume content these days, and I am one of those people who still uses an RSS reader. I’ve read one report on the device from start to finish, and am going to try a few peer-reviewed articles next.

I don’t think the ultimate twitter or RSS apps have been produced or perfected. I haven’t paid for one of these yet, but I think the device is going to create some yet-unseen breakthroughs in content consumption/tagging/organizing. And that’s going to be significant.

The end of the LCD projector?

I’m putting this out there, as I did on several occasions at Clinovations World HQ to the team there – I am wondering if this device could result in the peaceful end to the LCD projector in a dark room with chartjunk on the screen.

One of the best presentations I’ve seen was where a team printed out the slides and put them on a wall for people to see. You could tell how long the presentation was going to be and what was in it.

So imagine the same thing with the iPad – everyone has the presentation on the device, and its synced to a presenter, but everyone can still move around, or see what’s coming. And maybe interact with it and you. There’s no app for that yet in the store, but I’m curious…and I’m going to try this out on a presentation I’m giving this week at The Garfield Center for Health Care Innovation. I want to see, if, in a small group of people, I can informally show data using this device person to person, rather than projecting on a wall. I’ll report back.

I intended to buy Keynote, and I *accidentally* also bought Pages. Well, I was going to anyway. And, they’re not bad.

I am finding that documents created on the Mac need to be tweaked a little bit to look presentable on the device. For example, iPad Keynote doesn’t do 3-D graphs. Here’s what a slide from a presentation I gave looks like on the desktop: 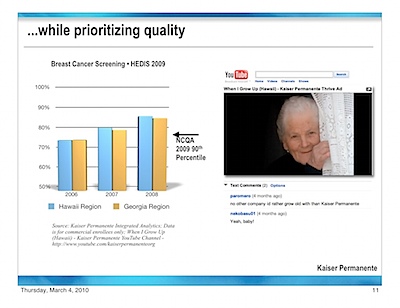 And here it is on the Pad. Still looks good, no?

It is a little awkward to move files to the iPad from the desktop Mac – you do it through iTunes. I think this will get easier, maybe using MobileMe or other service.

For Pages, same thing; however, I am impressed by how much layout can be done on the device. I understand from reading the reviews that people are expecting something more full featured from Apple….which brings me to my conclusion:

This is an early adopter device

I really like the iPad. The question is how it will fit into the work I do. In a Microsoft Powerpoint world, there will still be some head scratching, despite the hype. A lot of the apps are not finished, which is to be expected given that many developers didn’t have a device to test on. All of this means that patience is required, and gentle introduction into the way things are done, and seeing how it goes. I am interested in how this will tilt things slightly away from iPhone as “the platform” since there’s a pretty good mobile web browser here.

Just like the Newton Messagepad of days past, it’s not going to be obvious what to do with this device until we try doing things with it.

I've got an idea for an "Aging in Place in a Virtual Lifespan Community" app for iPad. Can you recommend an app developer?