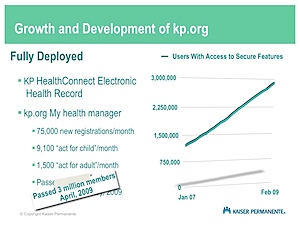 Without their help, Kaiser Permanente would not have been able to demonstrate kp.org, I’ll explain why.

We got the call (or rather, e-mail) a week before the Health 2.0 meets Information Therapy Conference in Boston, the premier event for the health care startup community (and which Kaiser Permanente is a Flagship Sponsor of): Would Kaiser Permanente be able to demonstrate KP HealthConnect and kp.org, connected to live servers, to this room of 450 health care patients, companies, and other leaders?

Piece of cake, we said. Except for the live server part. Even though this was the requirement of demonstrations at Health 2.0, we would not be able to do things this way, but it was still a lot of work, I’d like to assure everyone!

We only had a week to put together an integrated demonstration. A demonstration that was to last no longer than 3.5 minutes.

Now, I definitely believe that if you can demonstrate something in 10 minutes, you can do it in 3; the challenge is deciding what not to show in a health system that is so comprehensive in the way it does everything, not just health information technology. We also wanted to make this relevant next to really great work completed by Google Health and HelloHealth.

With several script revisions, test system password resets, and stocking of fictional patient records in a fictional system (i.e. one totally separate from the system patients, doctors, and nurses use every day), we created a few weeks in the life of Janet HealthConnect.

With that in mind, I asked Anna-Lisa Silvestre, VP of Online Services to serve as her letter turner. Kate Christensen, MD, the Medical Director of kp.org, was also close by as well. In the demonstration I prompted Anna-Lisa for several facts about the adoption of My Health Manager.

We then joined Janet HealthConnect’s physician, Allan Rogers, MD, opening Janet’s incoming e-mail. This was a great place to point out that Kaiser Permanente’s maturity with a comprehensive electronic health record has created a focus less on optimizing the acute care visit in the EHR, more on the In Basket as a central place for multispecialty care coordination.

Dr. Rogers then demontrated some of the efficiencies created by the KP HealthConnect team which allowed him to review the patient’s care snapshot right in the In Basket, and then to respond to Janet’s message with full decision support available.

In this portion of the demonstration we showed capabilities beyond sending messages – messaging is designed as an activity that promotes the personal physician-patient relationship with the right information in every encounter.

We quickly stepped through the in person visit, ending with the After Visit Summary, which we used to demonstrate the commitment to service quality, in that AVS use is measured and tracked to ensure a great experience with every encounter.

I closed the demonstration with a screen shot of a patient list, which showed that there may be many Janet HealthConnects, or populations of patients with chronic illness, that can be monitored as a group and cared for by teams, right within KP HealthConnect.

Our final slide is the one pictured above, where Anna-Lisa made the announcement to the audience that My Health Manager adoption has surpassed 3 million members.

So the the things we wanted to show that health information technology can and should do (and has done at Kaiser Permanente) are:

With special thanks to the Health2.0 meets Information Therapy team for their support and to the entire Health2.0 community for being supportive, and critical. This is where innovation comes from!

Many thanks to Ted, Allan, Susan Anna-Lisa and team for stepping in at the last minute and burning the midnight oil to get this done.

It was a great demo and we look forward to sharing the result with many more of you soon.

Ted, yours was one of my favorite demos b/c it was so real-world and yet also revolutionary. I didn't mind at all that it wasn't live. In fact, in the blur of presentations, I am not sure most would have noticed the difference since you used your 3 minutes so wisely.

Thanks for the kind words both of you, who we respect for your leadership in this space, I am going to pass them on to the folks that helped out and they'll be very appreciative,