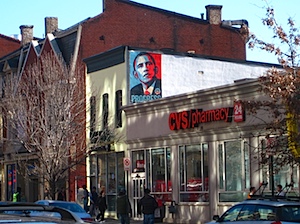 This week’s photograph, of a mural depicting President Barack Obama and the word “Progress,” was taken on P Street, in Washington, just off of historic Logan Circle, which at one time was the “social, intellectual, and artistic center of Black Washington.”

The murals blend in well with these historic neighborhoods – there were several people in the alley enjoying art along with us – and serve as a reminder that everything is possible in this new year, and beyond.