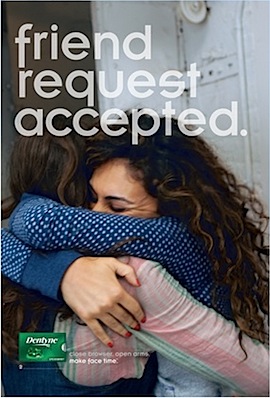 I photographed this advertisement while riding on BART in San Francisco recently – it struck me as a creative way to engage Generation Y, and in 2008, a reminder that for some people, online connections are becoming dominant to in-person ones (that and the fact that no one is advertising to Generation X, we’re the generation lost to marketers…). I liked it also because it supports my occasional motto, “in person is the new online.” On a more basic level, though, it speaks to the revolution that Web2.0 is creating around community – as I learned in the patient portal work I have done, these online connections can actually strengthen rather than weaken the offline ones.

You can see the rest of Dentyne’s innovative campaign on their site – they missed one crucial detail in their appeal to the Web 2.0 generation, though, by not making this content embeddable, which should be the case for a campaign like this. From my own experience, I know that big companies are often not of one personality, so there can be some disconnects as large organizations move into the future. In the meantime, enjoy the images.

NICE campaign at that link!! Love it!