These photos are taken from the Dupont Circle Citizen’s Association meeting, which was held in the incredibly beautiful International Eastern Star Temple, formerly the Perry Belmont Mansion, in Dupont Circle.

The first photograph is of DC Police Chief Cathy Lanier, the city’s first permanent female police chief, addressing the community about crime concerns in the neighborhood. I thought she did an excellent job of leading the discussion and was really impressed with both her experience (17 years of policing) and her leadership style. As a student of management systems, it’s great to see that the Police Department has projects and strategy and plans to fight crime, just as any business does to please its customer. Just as that famous carmaker, they have an interest in using automation correctly, keeping their officers as close to the public as possible, and working upstream to prevent crime. They also support diversity by having special units available to the muticultural communities of the City. It was cool to see and hear.

The police chief herself has a remarkable story of ascendancy as well which is inspiring to fans of diversity like me.

The second photograph is of an officer spending some time with sheet music while the program was getting ready to begin. I am sure this session came at the end of a long day for many.

The team explained why certain crimes happen, for example, that robberies are more prevalent because they are higher yield than drug dealing. There were little bits of “Information Therapy” like this throughout that helped me be more empowered. In the midst of my education, a directive came across loud and clear:

Wearing an iPod or talking on a cell phone while walking down the street says two things about you; that you are not paying attention, and that you have something that others want.

This was reemphasized to me by community members I spoke with. For me, this is a different kind of directive than, “don’t use a Blackberry in meetings,” because it’s about personal safety and the safety of people I share this neighborhood with.

I will heed the advice and be the citizen I aspire to be. 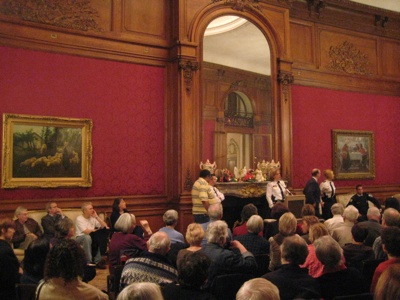 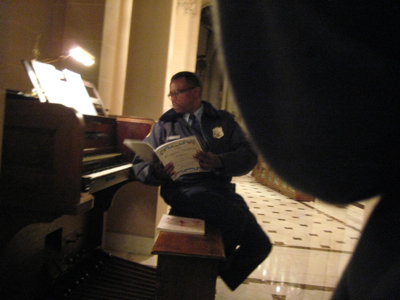